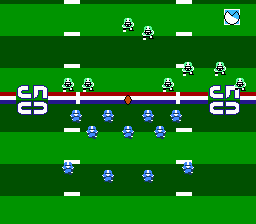 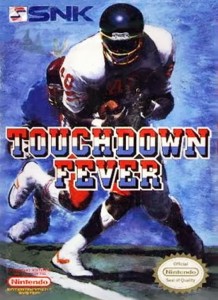 Are there any football titles on the NES besides Tecmo Bowl and Tecmo Super Bowl? Of course, other 8-bit football titles do physically exist, but why bother with any of them when the Tecmo Bowls are just so well-friggin’-made? Touch Down Fever only furthers this point. Despite being developed by SNK, the makers of the genre-defining Baseball Stars, the game plays like a slightly faster 10 Yard Fight. Which sounds positive, until you re-read my 10 Yard Fight review and realize that it’s one of the worst football games on the NES. Touch Down Fever has no real teams and no real rosters; only miniature adorable sprites running headlong into one another. There are four plays throughout the game – long pass, short pass, QB sneak, and backs – but choose them or not, it doesn’t seem to matter. None of the plays affect gameplay in the slightest. Passing works ok, but regardless of what team you pick, or what team the opposing side picks, it’s nearly impossible to make any progress. By my estimation, gaining ten yards per play is a solid win here. Interceptions are where Touch Down Fever really shines. Any team – yours or the computers – can intercept with the greatest of ease, which means you’ll constantly be switching sides back and forth. Even if these annoyances had been dealt with, Touch Down Fever is a mediocre football title that reminds me why I don’t care for the game in the first place.
D+
The following two tabs change content below.