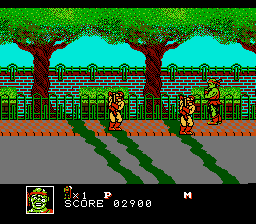 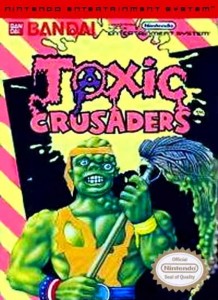 “What do I hear for this swingin’ bachelor, ladies? As you can see by the mop, he’s not afraid to do a little housework!” 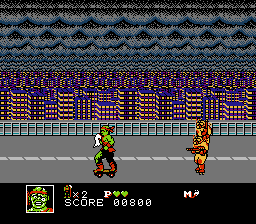 Toxie’s mop should take care of those piddly shotguns.

Toxic Crusaders is trash, and not the kind you smear on your television screen and call “art.” No, Toxic Crusaders is much more offensive. It’s a poorly crafted beat-em-up with dodgy hit detection, a busted attack, and none of the ridiculousness that made the movies/cartoon so… “memorable.” Naturally, you play as Toxie and your main weapon is a mop. The mop sounds cheesy, but it makes sense given the character. Get hit once, though, and that mop is gone, unless you die or move on to the next stage. Ever heard of a beat-em-up that gives you a weapon, only to strip you of it the moment you’re hit? Imagine the Turtles sans weaponry, and that’s about it.
Toxie is then stuck with a lousy punch, while his enemies shoot and throw acid in his face. All three of the enemies (not including bosses) have projectile attacks, which means your short-range punch does diddly unless you get right in their face. Since they bounce and bob constantly, you’ll be receiving hits more than you’ll be giving them. Cut-and-paste level design ensures that every level (save level 4, when you’re on a skateboard and your mop doesn’t disappear) has similar beats: three enemies, pause, barrels thrown at you, three enemies, barrels, six enemies, etc. The level backgrounds are nicely rendered (dig stage 2, with the moon that slowly ascends and makes the stage brighter), and the music will have you be-boppin’ and scattin’ all over the place. But these two positives aren’t enough to save Toxic Crusaders from its eventual home: an art installation. Or a garbage can, either way.
D-
The following two tabs change content below.