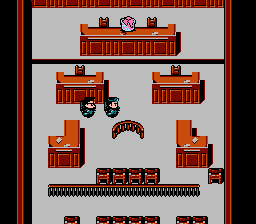 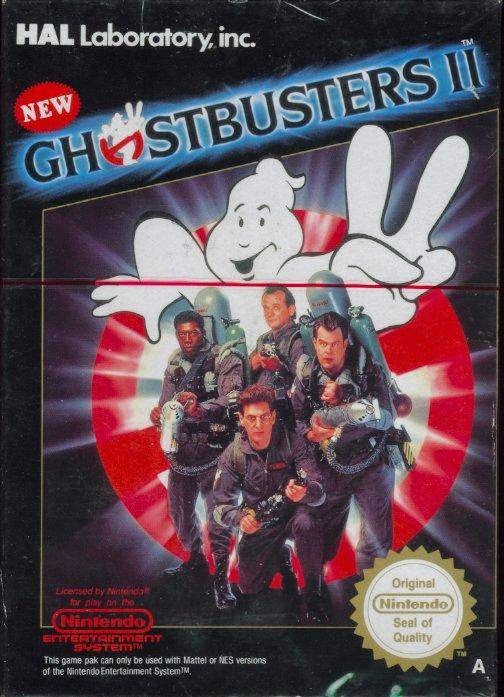 That’s right, Egon’s out in front.

I find this game guilty… of being AWESOME!

New Ghostbusters II is what most gamers desired/expected to see from a “Ghostbusters” game circa ’89. Instead of mundane tasks like keeping the Ghostbuster mobile gassed and ready, or ascending staircases aplenty a la’ the original Ghostbusters on NES, NGII provides straight ghost-busting action in its purest form.
Choose from two of the four Ghostbusters – Ray, Egon, Peter, and Winston – and slide down the fire pole to destiny. Your first-choice Ghostbuster (I chose Peter) controls the Proton Beam with ‘A,” while the second-choice Ghostbuster (Egon) opens the Ghost Trap with ‘B.’ To successfully trap ghosts, you’ll need to get used to hitting ‘A’ and ‘B’ at the same time (if you have a second player, they can control the second Ghostbuster). The button combo sounds potentially clunky, but to HAL’s credit, trapping ghosts feels natural and effortless – as it should, since it’s the entire game. Each of the five levels – from the Court Building to Peter’s Apartment to the Sewer of Slime – is a series of rooms where you trap ghosts. Once you capture all the ghosts in the room, an arrow will appear showing you where you need to go. Continue to “not be ‘fraid of no ghosts” until you get to the boss. All the hit players from the movie are here: the Scoleri Brothers! Janosz! Vigo the Carpathian! And, uh… Conductor Slimer? Well, he does look adorable in his conductor hat, so I’ll let it slide. If you’re a Ghostbusters fan – or even if you’re just an NES buff looking for a solid beef injection of arcade game goodness – you need to check out New Ghostbusters II. It’s not the deepest title, but it more than makes up for whatever those other two wannabe Ghostbusters games were trying to accomplish.
Why didn’t America get New Ghostbusters II, you ask? According to Wikipedia (the master of knowing things), there were licensing issues with Activision. Activision published the first two terrible Ghostbusters NES games in America, and thus (I’m assuming), put the kibosh on HAL’s attempt at righting their wrongs. Then again, a simplified version of NGII was released as Ghostbusters II for the Game Boy here in America, developed by HAL and published… by Activision?! I don’t even know. In summary, we was robbed. But thanks to the Internet, we can gorge on whichever Ghostbusters feast we choose.
B+
The following two tabs change content below.