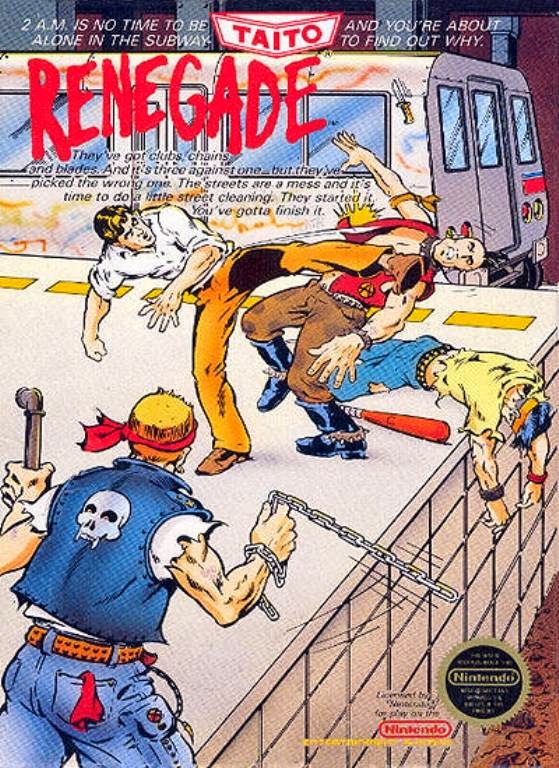 Never pick on a guy who obviously lifts weights. 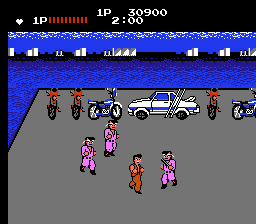 Renegade might star my beloved Kunio-kun (see: River City Ransom, Nintendo World Cup, Crash ‘N The Boys), and be one of the first beat-em-ups to grace the NES, but its lack of refinement is a turnoff. You play as Mr. K, an average Joe who uses the subway at two in the morning. Some street tuffs ambush him, and he’s forced to bust out some mad karate skills. Depending on how well you control Mr. K, your skills may or may not pay his (hospital) bills. Renegade controls almost exactly like Double Dragon, with ‘A’ being your right attack and ‘B’ being your left attack. In other words, if you’re facing left, ‘B’ will punch forward and ‘A’ will kick backwards; the reverse applies if you’re facing right. This control scheme was executed well enough in the original Double Dragon and quite elegantly in Double Dragon II, but in Renegade, it feels sloppy. Punches and kicks don’t connect nearly as well as they should. Throws work well, but are difficult to execute properly. Even if Renegade was equipped with tighter controls, its rudimentary gameplay and short length don’t warrant much replay. There are four levels consisting of two screens each, followed directly by an end boss. Higher difficulty levels are your only option once you’ve beaten the game. Later Technos beat-em-ups would refine the genre to a science, but with Renegade, they hadn’t figured out the formula.
C-
The following two tabs change content below.