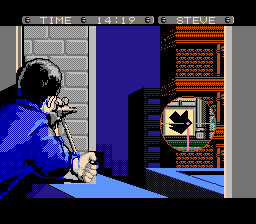 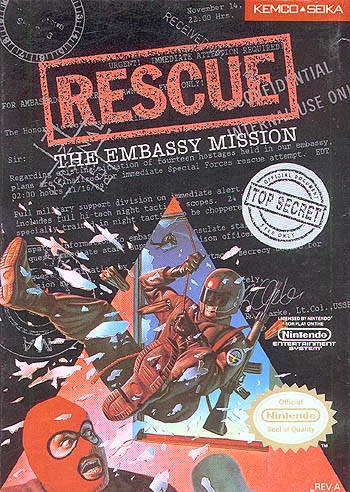 Steve shoots out windows for the fun of it. In his sniper class, he was voted “Most Likely to Die First.”

The NES really was the system that launched a thousand genres. Rescue: The Embassy Mission was a forerunner to tactical-strategy titles like Rainbow Six, Ghost Recon or any other Tom Clancy-endorsed soldier expedition. Control a team of six highly-trained operatives, infiltrate the foreign embassy (the country is not specified, so use your imagination – I chose Iran!), and rescue the hostages. Getting into the embassy is tricky. Three of your operatives will avoid spotlights, duck behind corridors, and crawl their way to vantage points marked as red ‘X’s on your map. Once there, they’ll set up sniper rifles and try to take out as many terrorists as possible. The terrorists appear in the embassy’s windows as gray people symbols, much like you would see on a restroom sign. They pop in and out of sight, but they never fire back and you never run out of ammo; convenient, to say the least. After you’ve taken out enough terrorists to your liking, choose one of the other three operatives waiting on the roof of the embassy. Rappel down the embassy wall, break through the window, kill any remaining terrorists, and save the hostages. Once inside the embassy, you enter into a first-person mode that resembles a dungeon-crawling RPG. Stylistically, however, this last section of Rescue is very much a first-person shooter, as your gun protrudes in front of your unseen person as you walk around, and you have the freedom to shoot at anything.
There’s hardly an aspect of Rescue‘s design that hasn’t been beaten into the ground in any modern shooter or stealth game, but on the NES, such design feels unique. I’ve played a lot of titles in the NES library, but there’s very few, if any, games that provide the atmosphere and gameplay that Rescue does. Unfortunately, one huge flaw is the game’s length: one mission, five different difficulty levels. I beat the game in six minutes the first time I played, and that was without hurrying. If Rescue gave players a few extra embassy encounters, it would be remembered as the innovator it is, and not by its other less-than-prestigious title of “Shortest NES Game.”
B-
The following two tabs change content below.