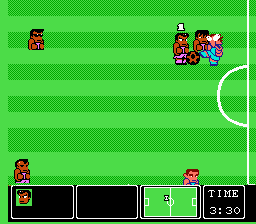 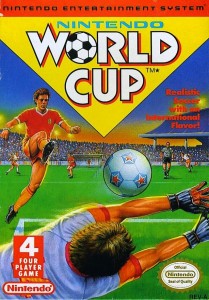 This cover is a horrible misrepresentation of a fantastic soccer game. Get early 90s guy off of there! We want Kunio-kun!

Best facial expression of all time? I wouldn’t argue.

A precursor to Mario Strikers, you ask? Not at all! Nintendo World Cup is a Kunio-kun soccer game dressed up in a bland corporate title. From Technos, the makers of Crash N The Boys and River City Ransom, comes another large-eyed, squatty beefcake fest – with a soccer ball! For a potentially cutesy soccer game, Nintendo World Cup doesn’t fluff around: thirteen teams to choose from/play against (including W. Germany and Cameroon – ah, the past), four-player compatibility, and, as is custom with Kunio-kun, senseless, hilarious violence. Get the soccer ball away from the opposing team by sliding into them or tackling them. Not only is it cathartic, it’s essential to winning matches. While you’re only in control of one teammate out of six, you can issue commands to shoot or to pass to your other teammates when they get the ball. There are also five “super kicks” you can use per half of each match. The style of kicks vary from team to team, but all are powerful, nearly unblockable shots; particularly helpful if you’re close to scoring a goal. Nintendo World Cup delivers a mean game of soccer, but the attention to detail is what make this game for me. Example: while each team bears visual similarities (large heads, small bodies), all have different styles of play and take time to master/destroy. The soccer fields look different depending on what country you’re playing, and even the music changes themes several times to accompany your progression. I’m not even a soccer fan and Nintendo World Cup drilled a hole into my heart. Oh Kunio-kun! Squash me in your arms and never let go!
B+
The following two tabs change content below.