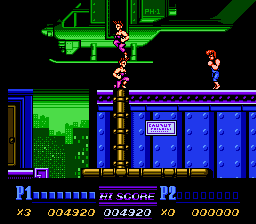 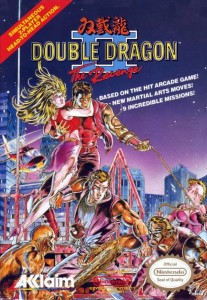 This cover is about as epic as they come on the NES. 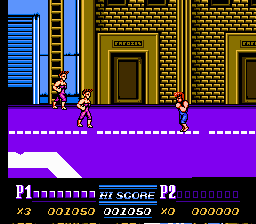 C’mon ladies, let’s get this over with.

After rescuing his beloved Marion out of the clutches of his evil brother, Billy Lee went back to working five nights a week as a delivery boy at Luigi Mario’s Pizza. All he needed was a one bedroom apartment, his girlfriend, and primetime television to make him happy. His days of blood on the streets were over… or so he thought. Crime syndicates began to take over New York City, forcing local businesses to pay ridiculous fees to operate on their turf. Any time a goon from the Black Warriors tried to take money from the pizza shop, Billy told them to beat it or he’d beat them. They complied, but not without exacting revenge. One day, Billy came home to find his girlfriend Marion blindfolded and shot, execution-style. Billy knew then that his fists had to come out of retirement. He reconciled with Jimmy, and embraced the relationship they once had as children. They swore a loyalty to protect the streets and to take down the crime syndicates… or die trying.
Double Dragon II may not be the best co-op game on the NES, but it is my favorite co-op game on the NES. Contra may be more intense and Teenage Mutant Ninja Turtles II may bring back more childhood memories, but the hands-on, git-er-done approach of Double Dragon II has always held great appeal for me. Every aspect of the beat-em-up gameplay has improved from the original. No longer do you simply progress from one level to the next. Each level is a set-piece from an Eighties action film (complete with Ah-nuld and Charles Bronson-esque Abobos), taking you from rooftops to inside helicopters to underwater bases. Double Dragon II‘s not as cinematic as Ninja Gaiden, but the influence the latter had over the cut-scenes is definitely there. The graphics are cleaner, the levels and backgrounds more varied and colorful and the sprites less squatty. While you no longer level up your moves, you have a greater variety from the beginning. Billy and Jimmy can even team up to do face-busting group moves. Even the single player experience, while not the preferred method obviously, is reasonably entertaining. In short, you have no reason not to experience this game.
After many grueling levels, Billy and Jimmy are battered, bleeding, but still standing. They’ve been through hell and back, but they’ve come upon the last boss, an enigmatic figure known only as “The Mysterious Warrior.” Several well-timed punches and Hurricane Kicks later, the Warrior has been defeated. The Black Warriors see their leader defeated and scatter to the winds. Though Billy and Jimmy have saved the day, it is a bittersweet victory. Other syndicates have heard of Billy and Jimmy’s antics and want them dead. Billy knows he has no one to come home to, no one to throw his arms around… or so he thinks. After the final battle, Marion runs up to him, somehow resurrected. He throws his arms around her, not questioning the fact that she rose from the dead. Her sudden reappearance, coupled with good ol’ American tenacity, gave Billy the courage he needed to take on the other syndicates. Jimmy reluctantly agreed.
A+
The following two tabs change content below.