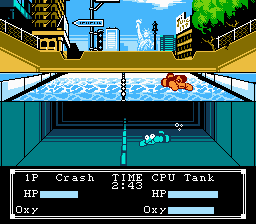 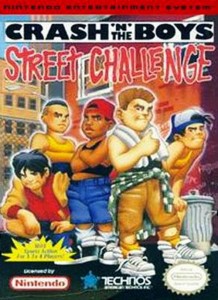 These guys play stickball for keeps. 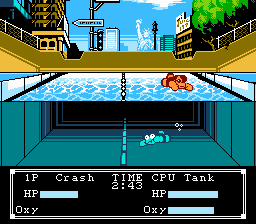 I never noticed that you’re swimming in the Jersey River. That’s absolutely appalling.

Most critics would argue that River City Ransom is one of the best beat-em-ups on the NES. Today it’s regarded as a cult classic, but like so many awesome games confined to bargain bins then driven up in price years later by rabid collectors, it was not looked upon as anything special upon its release. Quirky and Japanese, sure, but just another brawler in a sea of Double Dragons and Ninja Turtles. Perhaps this is why Crash ‘N the Boys: Street Challenge was unleashed upon the masses. Technos could have made another River City Ransom and called it good. Certainly, they could have played by the ol’ Capcom handbook and reused the same sprites, music, and overall story. Instead, they chose to take the same universe as RCR, and insert some button-mashing track-and-field type games. It sounds weird and potentially horrible, but Crash ‘N the Boys is the most entertaining variety sports game I’ve played on the NES. If you have a multitap, please do the right thing and bust it out for epic chaos that defies all reason, pomp, and circumstance.

Crash ‘N the Boys are from the South Side and they’ve curb-stomped all over those prep-school snobs, the Hillers. Now the Hillers are out from revenge and restored pride as they challenge Crash and his Boys to five different events.

400m Hurdle: Strap on an extra pair of Sneakers and buy a Spin Kick because those Hiller boys don’t mess around! Destroy your thumb by pressing right on the D-pad repeatedly and avoiding the Hiller’s attempts to lay you down with a 4 X 4 replete with rusty nails. The hurdles are almost inconsequential here, which is kind of awesome.

Hammer Golf: Instead of simply throwing a “hammer” (a 12 lb iron ball on a chain) a certain number of yards, you have to throw it a certain distance and get it to land in the hole. Mind the sand traps and the water and be sure to collect as many coins as you can so you can be fat stacked for the next title, which is…

Swimming: Aw yeah, bring out the brass knuckles for this event! You don’t so much bring your Michael Phelps to this one, as much as you bring your Tony Soprano’s henchmen. The goal is to kick and punch your opponent in the water without running out of breath. The thought of beating someone senseless in an Olympic pool, then rising to take a breath, before continuing to fight makes me all sorts of giggle.

Rooftop Jumping: This is the most difficult event and you will hate your life trying to vault over rooftops with reckless abandon. Getting the timing and the speed and the precision down for this event feels a touch too complex for what is otherwise a quirky and reckless game.

Fighting Scene: I suppose Rooftop Jumping can be forgiven as long as we get to fight those lousy preps from the Upper West Side. You have two bars, your HP and your PP. Get your opponents’ PP down and you’ll be able to bust out awesome special moves like the “Thunderdome Head Slam” and the “Robo-Butt Bumper Bash.” Actually, I just made those two names up, but there are names for the moves that are similarly amusing.

Just because Crash ‘N the Boys generally succeeds with its over-the-top story and extreme button-mashing gameplay doesn’t mean the cries for River City Ransom 2 should be ignored. I’m not even sure if Technos is still around, but if they are, they should heed the call. Sometimes there can be what we in the critic community call too much experimentation. In other words, Technos, stop making goofy sports games with your cute beefcake characters and just give us another brawler. Is it so wrong to want to BARF again?!