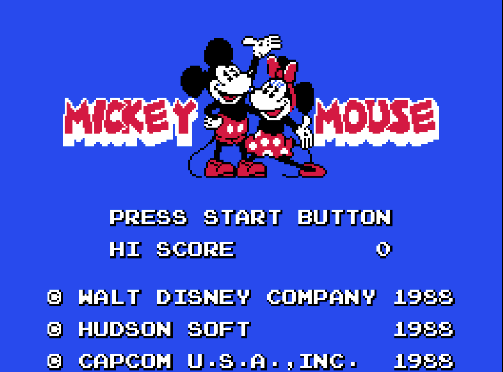 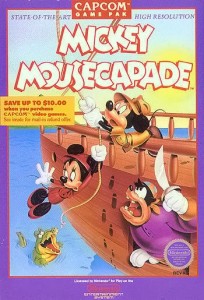 I applaud this cover, both for being awesome and for having very little to do with the game. 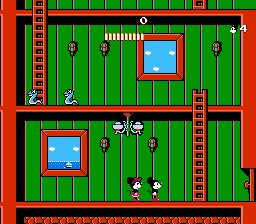 Mickey and Minnie’s house is in shambles. Rebuild lest their marriage be torn in twain.

Capcom’s Disney games usually woo the player with a bedrock of solid platforming and colorful levels, but every so often, they miss the mark (see Adventures in the Magic Kingdom). Mickey Mousecapade isn’t a total swan dive into rat crap, but it is a game that makes me ask, “Why bother?” The five levels included are short and ask very little of the player. Once you acquire a star weapon in the first level, it’s run and shoot, with Mickey and Minnie in tow. The first, third, and fifth levels require a bit of exploration, but they force you to explore in order to complete them. Boss battles are as simple as standing in place and shooting wildly. If your life bar is high enough, you’ll be able to survive them easily. After fifteen minutes of play, you successfully rescue Alice from Alice in Wonderland (?!) and the game’s over.
Mickey Mousecapade doesn’t have the typical creativity present in later Mickey games, and for that matter, it doesn’t feel like a traditional Capcom platformer. At least the latter is explainable. Hudson Soft, the developers of the Bonk, Bomberman and Adventure Island series, developed Mickey Mousecapade while Capcom published. According to Wikipedia (so take it for what you will) this game marked the beginning of Capcom’s often fruitful partnership with Disney, and indeed, it was the earliest Disney game that bared any sort of Capcom stamp. Thankfully, Capcom took over all development duties after Mickey Mousecapade. It remains the awkward cousin of the group, a Disney game that does nothing to distinguish itself from the myriad of licensed platformers already available.
C-
The following two tabs change content below.