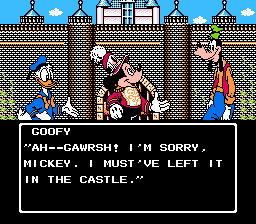 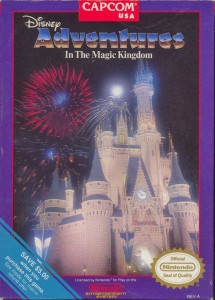 This is where the game stops being fun. 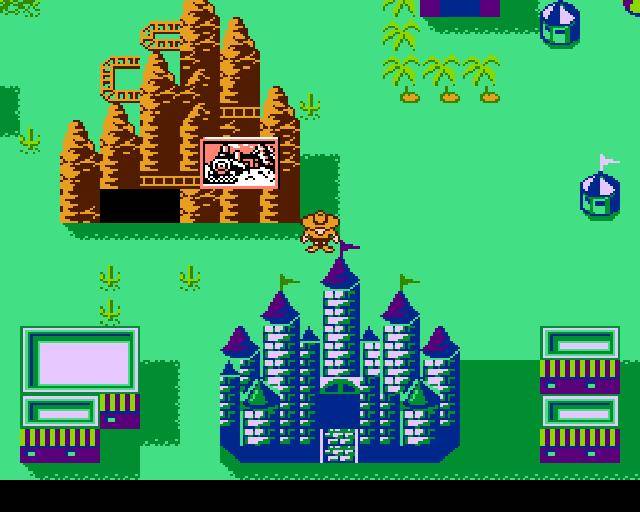 That’s you in the pancho. Ready for danger and RAIN!

What do you think of when the word “magic” pops into your head? Merlin? Harry Potter? “Warlock” starring Julian Sands? All of those are fine choices and, in fact, better choices than this game. There’s nothing “magical” at all about this kingdom, unless terrible graphics, weak control and music, and uninspired gameplay, make your heart come alive with enchantment.

Capcom’s one of those companies that pretty much strikes gold every time with their games, even if what they’re putting out is the seventieth installment of Mega Man: Kroton Power XYZ. Their Disney games that they released on the Nintendo – Duck Tales, Tail Spin, Chip & Dale, etc. – are considered some of the more fun platformers for the NES, in that they aren’t cheap, they control well, and deaths aren’t necessarily around every corner. I’m not sure if Magic Kingdom was Capcom’s first attempt at a Disney game or what, but it is sub-par on the level of Street Fighter: The Movie: The Game (yes, two colons were necessary for that title); at least the latter has camp value. 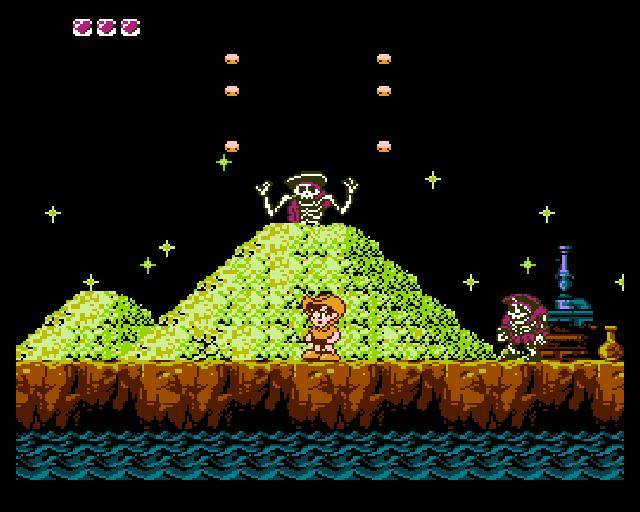 You play a goofy guy who resembles the Crocodile Hunter, and your goal is to collect six keys for your lord and master, Mickey. They’re scattered around the Kingdom in different attractions, like the Haunted Mansion, Space Mountain, Big Thunder Railroad, among others. Each attraction is a different style of game, whether it be racing (Big Thunder), button-presses (Space Mountain), or platforming (Haunted Mansion, Pirates). None of the genres are crafted well. Whether it boils down to poor controls, or cheap deaths, or not having any way to defend yourself when enemies are attacking you, the game’s levels are designed to make you fail and, subsequently, hate the game. The other feature of note in the game are the trivia questions random kingdom subjects will ask you. These questions were the most fun part of the game, but even they weren’t without flaws; “Steamboat Willie” was spelled “Steambort Willie” – the uncensored German edition, perhaps?

Maybe if you grew up with this game and Disney, it would have some fond memories for you. But Adventures in the Magic Kingdom doesn’t even compare to Capcom’s other Disney games. Don’t play it, or else Julian Sands will come to you in your sleep, threatening to release “Warlock IV: Will There Ever Be A Rainbow.”