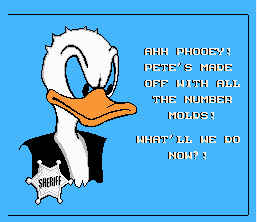 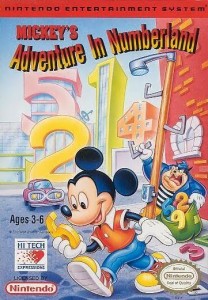 From ages dumb to vaguely aware. 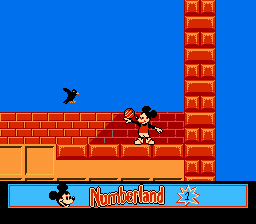 Mickey brushing up on his b-ball while trying to find the number 1.

Mickey as a character is an open canvas, a lifeless, albeit recognizable, personality. His amorphous identity ensures that he’ll star in either really creative platformers like Castle of Illusion or Magical Quest or unvarnished horse crap like today’s review, Adventure in Numberland. The vague plot of Numberland has Mickey rescuing numbers from five different worlds, each with two stages – all for the good of teaching children that numbers are important and, without them, society crumbles or some such thing. Alright, let’s review: “5 different worlds” x “2 stages per world” = “10 stages total.” That multiplication problem I just performed is vastly harder than any sort of number-mongering exercise you’ll find in Numberland. The point of each stage is to find a specific number, ranging from 1 to 10 and get to the exit. Let’s say you’re trying to collect the number 4 in the Number Factory (yes, that is a level). Other vagrant numbers like 3 or 6 will pop up, trying to lead you off the path of 4. If you try to collect them, Mickey will shake his head no – because some numbers can’t be trusted. There are other enemies besides numbers, but if you get hit by them, Mickey blinks, gets knocked backwards, then gets up again, proving that Chumbawumba may have been onto something. Basically, Mickey can’t die in Numberland, or at least, if he can, I could never kill him. And after ten worthless levels, that’s all I wanted to do to him, despite Numberland not really being his fault. On a much larger scale, for eighty-plus years, Mickey has refused to age or die or assume any sort of personality behind that mindless chuckle. Hi-Tech Expressions, the developers of Numberland, did what they could, including him in not one, but two children’s games bereft of teaching instruction or entertainment. Yet Mickey remains as vivacious and soulless as ever by doing exactly what he’s told.
D-
The following two tabs change content below.