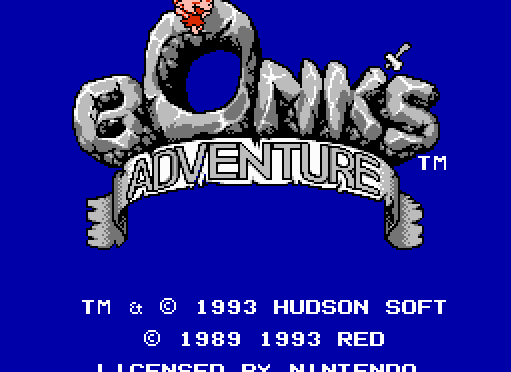 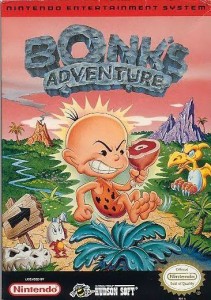 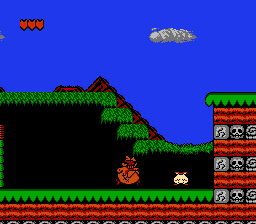 “Get Bonked” seems like it would have been a great tagline.

Bonk is a mascot from the late Eighties and early Nineties that doesn’t deserve any hatred, unlike say, Aero the Acrobat, Bubsy, James Pond, etc. With his bulbous head, intelligent eyes, and cutesy grin, Bonk is a simple, well-designed character that transcends his caveman limitations; it also helps that he’s not an overcooked furry rodent attempting to be Sonic. His games on the Turbo-Grafx 16 aren’t half-bad either, with each addition to the series adding something new to the traditional side-scrolling gameplay. The last of his games, the Air Zonk series, transformed Bonk into a cyborg and placed him in a futuristic shmup world, filled with Japaniacal enemies and over-the-top bosses. Needless to say, he is one of the great unsung mascots who has yet to get his due in the current HD era.

After NEC pulled out of the console race in late 1993, Hudson Soft took their beloved Bonk to the NES and tried to establish him there. It was too little, too late. Not only was Bonk’s Adventure released in early 1994, but its simplistic, tried-and-true gameplay ensured that no one outside of diehard fans would play it. For those who have never played a Bonk game, your sole goal is to get through the level “bonking” enemies with your large noggin and collecting yellow smiley faces. Smash flowers to get bits of life or large chunks of meat that can turn you temporarily insane/invincible. In terms of simplicity, the closest comparison I can make to the Bonk series is the Kirby series. Both series really thrive on the charm of their main characters, rather than the actual gameplay. They’re fun, quick platformers that make you feel happy for the couple hours you’re engaged with them.

Unfortunately, the NES version is far too easy and bland. While the Turbo-Grafx games were as simple as the NES version at their core, they also had challenge and a modicum of depth that made repeat plays worthwhile. I blasted through the five worlds of Bonk’s Adventure in forty-five minutes with only one continue, and I was playing pretty sloppily. While the levels aren’t poorly designed, there are no secrets to be found or hidden paths to uncover – straight bonkin’ all the way. The bonus levels seem like they would be fun if I could complete them. One has you jumping from platform to platform collecting miniature chili peppers, but Bonk is not a jumper like Mario, so I could never make it past the first couple platforms. Despite my ambivalence towards the game, I completed it simply because… I love Bonk and will play anything he’s associated with. That being said, if you’ve never played Bonk, this won’t be the game to bring you in.

The only reason this incarnation of Bonk bears mentioning at all today is because of its rarity. Due to the late release date for the game, the cartridge can regularly be found for eighty dollars or more. True story: I bought the game for three dollars in 2004 at a used game store. When I found out how much the game was worth in 2010 – eighty dollars, at the least – I tried to sell it on Craigslist, only to receive numerous low-ball offers (eBay, on the other hand, had too many Bonk’s for sale). Finally, I tried taking it back to the same used game store, if only to get a decent amount of trade for it. They wanted to pay me ten bucks in trade. I declined, took the game back, only to be approached by a random stranger within the store. He asked me, “How much were they going to give you for that game?” I told him the store’s offer. He said, “I’ll buy it right now,” made me an offer of thirty dollars cash and I took it, desperate to get rid of it. The point of the story is, Bonk’s Adventure for the NES is anticlimactic, and while you might get some worth out of it, probably should be dealt with as quickly as possible. This has been my poor attempt at ending this entry. Good night.