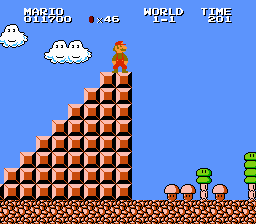 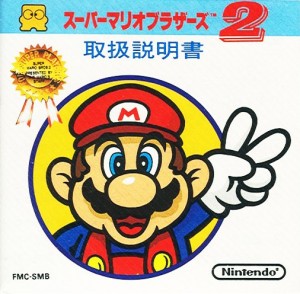 Be warned: Mario is luring you into the game with his happy-go-lucky smile.

At least the clouds are happy, right? Right?!

Busta Rhymes once asked, “Are you prepared?” Small pause. “I hope you are prepared.” I can’t think of more perfect words to begin this review. If you aren’t prepared for the abrasive difficulty found within Super Mario Bros. 2…well, I hope you are prepared. But wait, Super Mario Bros. 2? The Mario game where you can play as Luigi, Peach, or Toad? Sorry cupcake, that particular Mario Bros. 2 – as familiar to you as your favorite childhood stuffed animal – is a sham. The American version of SMB2 is a re-working of a game called Doki Doki Panic. The game I’m talking about – the game you need to be prepared for – is the real Super Mario Bros. 2, otherwise known by the Western half of the world as The Lost Levels, or that game on Super Mario All-Stars that nobody played.
If the original Super Mario Bros. was a refreshing cocktail, then Super Mario Bros. 2 is a series of strong shots, each more fiery than the last. The game follows SMB1‘s template almost to the tee: Princess has been captured, so you gotta rescue her. Eight worlds with four stages each (or so you initially think), loads of running, jumping, spitting fireballs at Goombas. But just as you’re settling into a stone-cold groove in the first level, you find the Poison Mushroom, ingest it, and shrink back down to tiny Mario. That shouldn’t have happened, you think. Mushrooms are supposed to be good. Your logic is spot-on, but the game’s logic has been altered. Super Mario Bros. 2, unlike the first game, is against you. Within the first couple worlds, you discover windstorms. They blow either right or left and can change directions in an instant. Often you’ll be asked to jump into the windstorm to reach the next platform. Given their bi-polar tendencies to change directions, this can get tricky. Like in SMB, there are warp zones within the game. Two of the warp zones you’ll find will send you back to world 1. Yup, backwards warp zones. So many swears. Also, to truly “beat” the game, you have to beat it eight times in a row to unlock Worlds A-D. World 9 will also appear if you refrained from using warps during the game. Thankfully, in the All-Stars re-release, you only had to beat the game once to access these stages. My lands, Nintendo, what were you thinking? What raises my particular bile are the jumps SMB2 asks you to make. Many of them seem impossible, especially with all the chaotic wind and enemies surrounding you while you’re trying to make them. Take heart. If you have the gumption, you can beat Super Mario Bros. 2. It might make you pass out when you’re done, but what stories you’ll have! 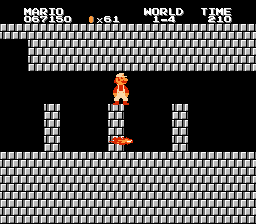 Mario knows how ridiculous this all looks.
Super Mario Bros. 2 is difficult, no question, but does it cross the line? I meet a lot of gamers who write it off as “too hard.” Not just your typical run-of-the-mill gamer weaned on contemporary hold-your-hand game design either, but authentic retro warriors who have soldiered through Battletoads, Bionic Commando, and Ghosts ‘n Goblins, among other masochistic field trips. “Too hard? Compared to those games?” I ask. “No way. And you know how I know? Because I’ve beaten Super Mario Bros. 2. It can’t be that hard.” Surely there’s another reason why gamers just aren’t fans of the game. But when I ask why people don’t care for Lost Levels, I don’t receive clear answers. “It’s not as good as the American Mario Bros. 2,” “The game asks too much from the player,” and “I don’t know, man, it’s just too hard” are my top 3 responses – all of which are actually half-answers, at best. I have two theories, though, as to why SMB2 is held with such ambivalence or even disdain. They are as follows:
I understand the perspectives of  gamers who don’t enjoy Super Mario Bros. 2, but I completely disagree with them. Sure, the level design isn’t as fluid or memorable as the original game, but who cares? Nintendo of Japan designed the game for those who had already conquered Super Mario Bros. a thousand times over. Nintendo of America made the right decision to bypass SMB2 for a re-worked Doki Doki Panic, but I believe both the American and Japanese versions deserve respect on their own terms; if only because they highlight the remarkable creativity on display at Nintendo during those days. Super Mario Bros. 2 is not the Mario we’re used to playing, and I adore it for this reason.
A
The following two tabs change content below.