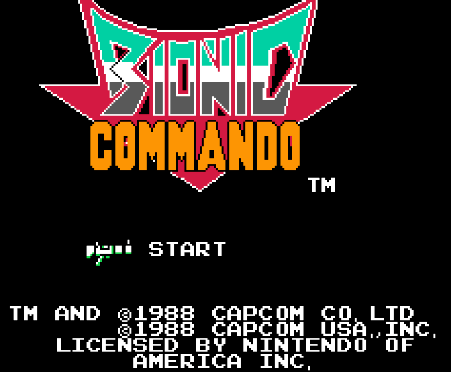 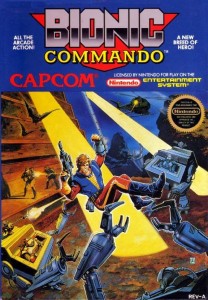 Little Johnny Quest is all grown up and fighting against Nazi robot arms and evil Russian spotlights. 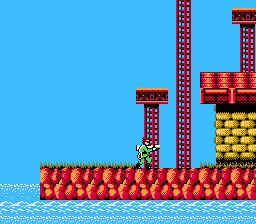 Radd Spencer handcrafted his suit out of Velcro and glow-in-the-dark paint.

Bionic Commando is arguably one of the most revered NES games among hardcore gamers; the kind of people who believe continues and passwords aren’t a right, but a privilege. Unlike the majority of my reviews which cost me little time or effort, I wanted to give this game a fair deal. For starters, I knew it was going to be challenging, and boy howdy, did it not disappoint. This is probably the most difficult NES game I’ve ever played outside of the original Ninja Gaiden. I decided to give the game several days to “sink in” a.k.a. I needed to get better at the game before I could properly review it. Well, I could postpone this review indefinitely, or I could just admit what my ego wants to keep hidden: I really suck at Bionic Commando.

Thankfully, the game is so well made, that my suckiness doesn’t prevent me from appreciating the game’s depths and intricacies. Let’s get the obvious out of the way first: the game is an side-scrolling platformer that doesn’t contain a jump button. This in and of itself is huge, and not just when the game was released in 1988; even now, in 2011, I can’t think of any side-scroller that does this. In clumsier hands, such an audacious tactic would have likely failed, but Capcom pulled it off beautifully. The arm often knows where it needs to go, and if you’re confused about where to hook on to, take notice of your surroundings: the answer often lies right in front of you, like with the lamppost/spotlight in the first level. Ladd Spencer, said commando of the bionic variety, isn’t the easiest chap to get along with at first, but once you master his arm, you won’t miss the jump button in the slightest.

While you do progress from one level to the next, like any other side-scroller, Bionic Commando gives you the feel of non-linearity with the main level grid. When you first begin the game, Radd is in a helicopter and you’re asked if you want to “transfer” to a different level or “descend” into the level highlighted. Once again, BC shows its uniqueness: you’re allowed to play the game out of order, even though you really shouldn’t; this made me feel like I was on a unique mission with Radd, instead of just a mindless drone obeying orders from the Army. The level grid may look confusing at first with its mishmash of random numbers, but it’s easy to tell what direction you want to go after you beat a level; blocks that are colored completely white are actual levels, while blocks with red middles and white borders are “neutral” bases.

It makes me sad to report that I have brought shame to my family and my ancestors by only reaching Area 4. For those who have yet to play BC, Area 4 is only the second level. To make myself feel slightly better, I will say that I almost beat the second boss, but sweet dancing Moses, this game throws everything at you to make sure you do not survive. The obscene difficulty specifically reveals itself in two ways: the first is not mastering the reach of your bionic arm; the second is avoiding the stupid soldiers that randomly drop all around you. The former is an attainable goal that merely takes practice; the latter is a exercise in cheapness that is designed to make the game harder. What difficulties await me in the later levels? I’m not sure because, as my thesis statement made clear, I suck at this game. But, unlike another difficult game like Battletoads, I desire to get better at this game because it’s just so darn fun. I’ve played the first two levels like fifty times, and I still want more abuse. That should say something.

– Hitler is the final boss. If that doesn’t make you want to reach the end, etc.

– Bionic Commando is actually a sequel to a less-impressive game, Commando. Neither game has anything to do with the award-winning Schwarzenegger film, which emerged around the same time.

– People often quit Bionic Commando because of the lack of a jump button. Bunch of babies!