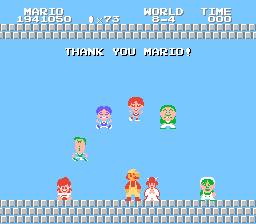 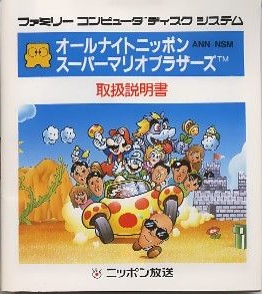 So very right. So very wrong.

(a slightly altered version of this article appeared on GoozerNation.com in December 2011)

The original Super Mario Bros. changed gaming history, which is why it’s interesting that several different/alternate versions of the game exist. Vs. Super Mario Bros is probably the most well-known, as it was a tabletop arcade featured prominently in different arcades and Pizza Huts around the mid-to-late Eighties. But perhaps the most obscure (and rare) Super Mario Bros. version is All Night Nippon Super Mario Bros. for the Famicom Disk System. 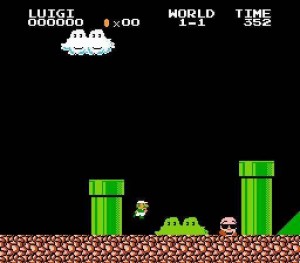 Luigi is so befuddled by the creature in front of him, he pauses in mid-air.
Many of the words you just read may not have made sense, so allow me to explain. The Famicom or “Family Computer” was the name of the NES in Japan. The Famicom Disk System was an add-on to the Famicom, similar to how the Sega CD worked with the Genesis, except it used floppy disks instead of CDs or cartridges. Many of the most beloved games on the American NES, like Zelda, Castlevania, and Super Mario Bros. 2 started out life as FDS games. “All Night Nippon” is a popular late-night talk show in Japan that’s been regularly broadcast since 1967. In 1986, All Night Nippon had a raffle with this game as the prize. The game itself is an officially licensed hack, which in and of itself is a rarity. I think Nintendo would probably shudder at the idea of hacking their own game now (wait, does Super Luigi U count?), but back in the day, they were trying to raise awareness and build the popularity of their new FDS add-on anyway they could. 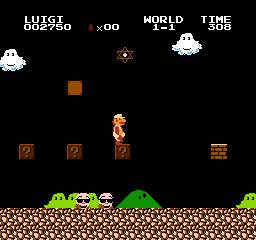 Uh, should I get that?
All Night Nippon SMB is very much like the original Super Mario Bros at its core, but the differences that are in the game are so bizarre – so definitively Japanese – that it’s certainly worth playing through until the end just to see them all.
What to watch for: 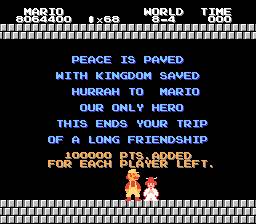 Hello chief! Let’s talk, why not!
There are some additional differences, but these were the ones that stood out the most to me. Up until recently, I had never heard of this game, but due to its rarity, I imagine the only way one could play this is by paying exorbitant amounts of money on Ebay or by downloading it illegally. I do not recommend the latter, but that usually doesn’t stop anyone from doing what they want to do. Play at your own risk. 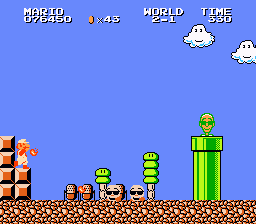 This sort of thing is bound to happen in the Mushroom Kingdom at some point.
All Night Nippon Super Mario Bros stands out as the premier alternate version of the original SMB because it’s light-hearted, weird as hell, and oozing with Japanese culture. Do yourself a favor and watch some Youtube videos of this thing. Bonsai!

Thank you, Mario! You have successfully completed your second acid trip!
The following two tabs change content below.