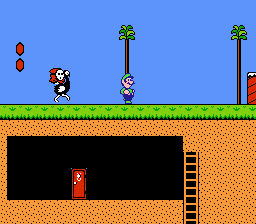 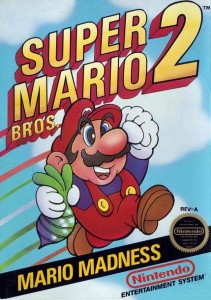 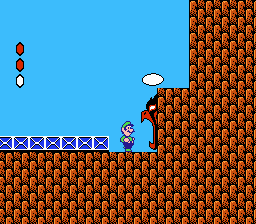 Luigi’s like, Yeah, I’ll do that when I’m dead.

Nintendo incorporates Mario into every different genre now, from street b-ball to Dance Dance Revolution to whatever Fortune Street is, so it’s hard to comprehend how radical Super Mario Bros. 2 felt in 1988. It was a completely different breed of Mario game than what gamers were used to.
Take the cover, for instance. Mario is shown leaping through the air with a twinkle in his eye, a smile on his face, and… a turnip in his hand? That turnip is no mistake. Indeed “vegetables vanquish evil” appears to be the moral behind Super Mario Bros. 2. Throughout the game, beady-eyed turnips, pumpkins, radishes, carrots, and other children’s favorites are chucked recklessly at foes (another moral: wasting food is ok as long as evil is put in its place). SPOILERS: even the final boss, Wart, is killed by throwing vegetables directly into his putrid mouth. The method isn’t quite as fulfilling as raining fire down upon Bowser, granted, but the results are just as effective. The use of vegetables as weapons of great power was only one of many outlandish changes made to the then-fledgling franchise.

Get this man a shovel!
For starters, you weren’t forced to play as Mario. Luigi, Peach (née Princess Toadstool), and Toad were all selectable characters at the onset of every level, each with their own unique strengths and weaknesses. Luigi jumps the highest out of the four, but his slippery legs can be a nuisance. Peach hovers for a couple seconds when she jumps, but her puny biceps have a hard time pulling items out of the ground. Toad, well… we love Toad. He’s got spunk if nothing else (he can lob a mean radish!), but his small stature can limit his progress. Mario is, naturally, the most well-rounded of the four and a good choice for when you want to run through the game, worry-free. 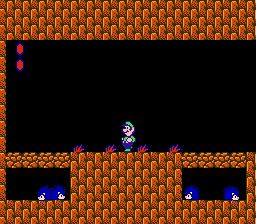 …Sonic?
In SMB2, Mario is no longer in the Mushroom Kingdom, collecting coins for lives, throwing fireballs at Goombas, and singlehandedly trying to rescue the Princess from the evil dragon, Bowser. Now, the Princess fights alongside Mario to free a dream-land known as Subcon, from the vegetable-hating clutches of another oversized dragon, Wart. Goombas and Koopas are replaced by Shy Guys and Bob-ombs, and you don’t have the option of killing them with fire or even jumping on their heads. Only vegetables will do the trick. Instead of fighting the same Bowser template eight times in a row, there’s a different boss at the end of each world. Minibosses known as Birdos appear at the end of every stage. Potion bottles open up doorways to Sub-Space, a blacked-out Subcon alternate universe. It is here where you get coins, though the coins themselves don’t help you gain extra lives. They’re used in a slot machine at the end of each stage, which can win you extra lives – if you’re lucky (go for the cherries, the money fruit). Mushrooms also appear in Sub-space, but they’re not used to enlarge Mario and gang. They add an extra heart onto the life bar of the character. At the start of each level, though, you’re back down to two hearts. You’ll have to find Sub-space again, along with another mushroom, if you want three or more hearts for each subsequent level. 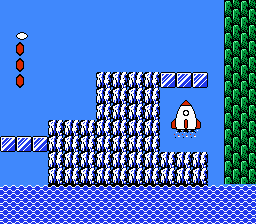 Better believe it’s gonna be a long, long time.
Life-bars, different terrain for each world, new enemies, Sub-space, and three additional playable characters made for Mario’s craziest adventure to date. But let’s face it, the Mario games prior to SMB2, especially Super Mario Bros., weren’t exactly normal. Subcon, Goombas, Mushroom Kingdom, Wart, Birdos, Bowser: it’s all a strange, funky poetry. What really distinguishes Super Mario Bros. from Super Mario Bros. 2 is the lack of points.
Points were the defining feature in arcade games in the 70s and 80s. Before the Famicom/NES, Nintendo made arcade games. Thus, it only makes sense that the original Super Mario Bros. carried the arcade-based points system with it onto Nintendo’s console. But three years after the NES debuted in America, times had changed. Consoles still had, and would continue to have, arcade ports, but they were also host to a bevy of original titles not found in arcades. Console games shifted the emphasis away from points to beating the entire game; this makes sense given the amount of time one could dedicate to a console game versus an arcade game. Because of the game’s lack of points, Super Mario Bros. 2 is the first Mario game that feels like a fully-formed console adventure from start to finish. Super Mario Bros. may have changed the face of gaming as a whole, but Super Mario Bros. 2 further shifted the industry’s emphasis to the console over the at-the-time dying arcade scene. 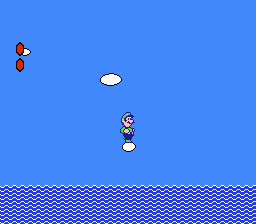 Zen.
Super Mario Bros. 2 –whether the original difficult Japanese version or the Mario-skinned Doki Doki Panic American version – was a gamble for Nintendo. Super Mario Bros. made the NES significant and relevant in America. What sequel could possibly live up to an American fanbase’s expectations? As is often the case with Nintendo, their potentially fatal decision to re-work Doki Doki Panic into a Mario title resulted in widespread acclaim and millions of units sold. What’s even more astonishing is that, in retrospect, SMB2 feels like the perfect transition point from the more arcade-like Super Mario Bros. to the epic world-leaping of Super Mario Bros. 3. As the Nintendo of today continues to churn out one similar-looking Mario game after the next to placate money-starved investors, Super Mario Bros. 2 will forever stand as a reminder that, at one time, Nintendo took some significant risks with their biggest franchises.
A 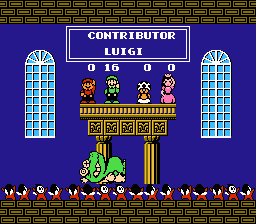