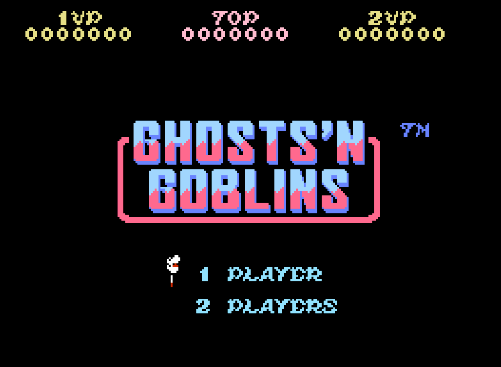 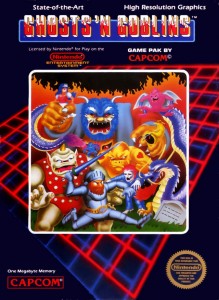 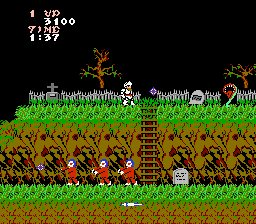 Tuck those boxers into your armor, Arthur, it’s go time!

Ghosts ‘N Goblins: you play as a knight named Arthur and your goal is to get across six stages filled with zombies and goblins and red devils and crows and those plants from the “Little Shop of Horrors.” You get two hits before you’re dead. Any sort of armor replenishment is rare and hard to come by. The graphics are glitchy, making it easier to mistake enemy projectiles for background pixels. You basically need to be throwing your weapon constantly whether enemies are on the screen or not. It doesn’t eliminate your chances of getting hit, but it does decrease them. Yes, the game is beatable, thanks to unlimited continues and perhaps some Johnny Walker by your side. Yes, you will feel a sense of accomplishment when you beat it because it is so hard. But really, Ghosts and Goblins at its core, just isn’t very fun.
And now, an op-ed piece:
I’m not exactly sure why this game is so widely renowned, but I have a couple ideas. It was made by the young bucks at Capcom, and people widely consider their work on the NES to be some of their best. It came out in 1986 when the NES didn’t have much going for it beyond some of the original launch titles. And it was- er, is hard as balls. It is fall down to your knees, throw your NES controller at the wall, and sob because you thought you were a decent gamer hard. And yet, old-school gamers thrive on brutal difficulty, which is ultimately, to me, the main reason why this game is so well-remembered, even now. I don’t understand it. Why would you want to punish yourself? I can understand wanting a challenge especially as games today have really made challenge more of an option and less of a reality. Still, the older I get, the more I play games to relax, to take a sit down and not think about real world struggles and problems. When faced with Arthur and his skivvies throwing javelins wildly, jumping this way and that, I can’t help but get anxious. Despite that, critical consensus still sways me. I can’t help but think of Ghosts ‘N Goblins as a series as anything less than “classic.” That doesn’t mean I have to like it.
D
The following two tabs change content below.