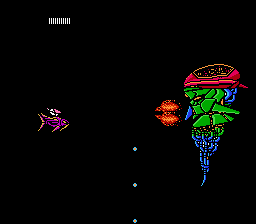 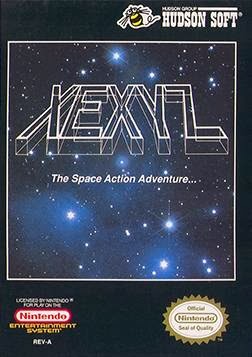 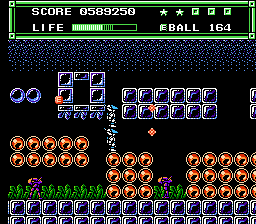 Just another day on XEXYZ.

Just so we’re all clear, a “XEXYZ” (pronounced zeks-zees) is a series of five worlds turned into one nation; at least according to the official Xexyz manual written by Hudson Soft. Why XEXYZ and not “Five World Nation” or “Cinco-tastic” or anything else other than XEXYZ? The name lends the game a sense of mystery, as does the sparse box art, but it’s not essential to understanding the plot or playing the game. Get past the introductory awkwardness, though, and you have a fantastic platformer/shoot-em-up hybrid that relishes in surprising the player.
Xexyz starts as a traditional left-to-right platformer, with your main goal seemingly to take out the swarms of enemies. Right away, however, you notice doorways littered throughout the stage. Each one of these rooms holds something important, whether it’s in-game hints, weapon/magic upgrades, mini-games. Unlike a box of chocolates, you truly never know what you’re gonna get when you enter these rooms. One room had an evil flying dog’s head and an empty stone basin. Once I defeated the dog’s head, the basin filled with water, and a half-naked fairy (no nudity – this is Nintendo, after all) popped out and thanked me for rescuing her. And a good day to you, ma’am! In order to gain access to the “Mechanical Castle” (the second part of the stage), find a hidden doorway and beat a mini-boss to acquire a Force Star. The hidden doorway’s location is usually given via hints in one of the rooms, but it’s never very hard to find. Once you’ve entered the castle, it’s more maniacal platforming until you reach an empty room with just a ship. Hop into the ship and the shmup portion of Xexyz begins in earnest.
From a gameplay perspective, the horizontally-scrolling shmup portions are standard. Your weaponry can be slightly upgraded/sped up via ‘S’ and ‘P’ power-ups, but there’s not the type of depth that, say, Gradius brought to the genre. At the end of the first shmup section, you’re given two exits to choose from. Head out the wrong exit and you’ll have to play the same section over again. Head out the correct exit and you’ll blast through another shmup section before having to choose between two exits again. Picking the appropriate exit leads you to another room where you ditch your ship and head back on land for more platforming. I appreciate the idea that each mechanical castle is so vast and widespread that the space warrior has to use a ship to reach certain sections. Even though the sections themselves are short and button-mash-erific, the thought behind their placement in Xexyz‘s overall structure is well done.
Once you beat the boss of the mechanical castle, hop in the castle’s ship and take to the skies for a complete shoot-em-up level. The shmup stages are always shorter than the platforming ones, but they’re more fully realized than the sections in the castle. You’re away from the castle’s confines, flying in the fresh air. The enemies are more aggressive, but there’s more space for you to maneuver your ship. Once you get closer to the boss, day slowly turns to night, Xexyz speeds up, and you only have time to avoid enemies and obstacles, not to shoot. Like so many elements that Xexyz throws at the player, the sudden change in speed surprised and delighted me the first time it happened; so much so that I laughed out loud when it was happening. I can’t remember the last time a game imbued me with such joy, and over a feature so small and seemingly inconsequential.
It’s difficult to encapsulate all I appreciate about Xexyz. Its graphics are colorful and detailed, the music is energetic with just the right touch of melancholy, its controls are almost pitch perfect. The platforming stages are usually odd-number (stage 1, 3, 5, etc), while the shmup stages are even-numbered. You’re never fatigued by any one style of play. Indeed the game doesn’t play by any rules other than its own. Some weapon upgrades, like the ball that bounces at a 45 degree angle, almost seem like downgrades until you learn how to use ’em and realize their brilliance. I loved using the Mirror magic where another spaceman is placed on top of your existing spaceman, doubling your firepower. If it weren’t for its clumsy (if not intriguing) name, Xexyz might be mentioned among the NES heavy-hitters – Ninja Gaiden, Contra, Castlevania. For now, it’s a cult classic begging to be rediscovered.
A-
The following two tabs change content below.