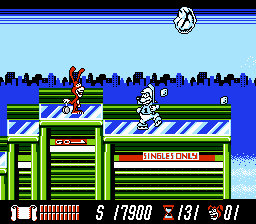 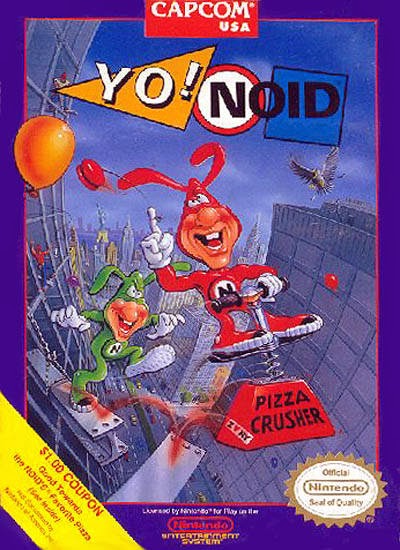 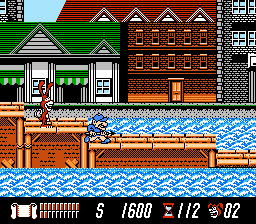 Yo! Noid has a strong cult following, despite starring one of the most obnoxious mascots of the ’90s. “But Dylan! It’s a classic tough-as-nails Capcom platformer in the vein of Mega Man!” Well, yeah, the Noid has tight controls, the music is sprightly, and the platforming varies just enough to keep things interesting from stage to stage. But after discovering that Yo! Noid used to be Kamen No Ninja Hanamaru in Japan, I can’t help thinking that we in the States were robbed. Sure, they’re the same basic game, but be honest: would you rather control a yo-yo slingin’ mascot of corporate oppression (via pizza), or a hawk-wielding badass ninja? Would you rather fight in ancient Japan or the run-down streets of New York City? Why do I have to ask these questions at all? Because Capcom wanted to fill its coffers with large amounts of free, undercooked Domino’s pizza. Now, I’m not surprised Capcom sold out. After all, this is the company that had a long term contract to make Disney games. They also rehashed franchises on a yearly basis before it was cool. But to shill for what was (is?) arguably the worst American pizza chain with the worst pizza mascot? That’s more offensive than Resident Evil 6.
Yes, if you couldn’t tell, I hate the Noid. But I gotta hand it to Domino’s: if they’re gonna throw large piles of money/greasy pepperonis at any development company to make their video game, I’m glad it was Capcom and not Beam Software. Yo! Noid isn’t the most original platformer, but it is playable and, at times, enjoyable. Like the Capcom Disney platformers, it has a lightness to it that (despite the Noid’s presence) makes the game work much better than it should. Every level has a different shtick, whether it’s rising/falling ground, using a boat to sail across the level, riding boxes across sewer slime, pogo-ing through what I presume are the Manhattan rooftops. I guarantee Yo! Noid never had a more varied experience in his time as a mascot. I’m not clueless, though – the success of Yo! Noid stems from it being built on Hanamaru‘s rock solid foundation.
Unlike most of the Disney platformers, the Noid is tough. On a scale of Capcom’s NES endeavors, it’s on par with Mega Man 4 – not Bionic Commando hard, but not a Rescue Rangers 2 breeze, either. When you first begin the game, you notice a meter on the left hand side of the screen. If you didn’t know better, you might assume it’s a life meter. It looks like a life meter and it’s where a life meter might be placed. At first, the meter is completely black, and as the Noid collects scrolls, the meter is refilled to red. Imagine my surprise when a fish popped out of the ocean and hit me with what I assumed was a full red life bar and I died. Come to find out, the meter is a magic meter. Yo! Noid can only take one hit of damage before he’s dead. My assumptions were my own, and not the game’s fault. There are enough cheap moments, however, where you think, Even Mega Man had a life bar, Capcom. And those games were still plenty hard! Precarious jumps, peek-a-boo enemy placement, slippery floors, projectiles (the Mario 3-like cannons are the worst), automatic scrolling, skateboarding portions where you don’t have your yo-yo and the skateboard only sorta, kinda hurts enemies. So much needless Noid brutality. As I mentioned earlier, you do have a magic meter and you eventually acquire magic, but not until the fifth level or so. There are three types: a flash magic that kills most enemies, a speed-up magic that makes the Noid go faster, and a earthquake magic that clears out ground enemies. The magic is useful when you have it, but it should have been made available sooner. For a game that was likely marketed to kids more than adults, Yo! Noid will have you filling up an extra-large swear jar by the end of your time with it.

“Singles Only”? That’s you, Noid!
Then there’s the Pizza Eating Contest, which comes at the end of most odd-numbered stages and doubles as a sort-of Boss Mode. Yo! Noid and his Noid opponents each have nine cards with varying numbers. In the contests I partook in, my Noid never had cards with a higher number value than 3. My opponents always had higher valued cards, usually 4’s and 5’s mixed with lower numbers. The goal is to draw higher-numbered cards than your opponent (who always goes first), but you don’t have to win every round. Let’s say your opponent draws a 1 and you use a 3. You gain 2 pizzas to your “Pizza Bar” at the bottom left hand corner of the screen. Fill in your pizza bar – anywhere between 11 and 14 pizzas – and you win. Your opponent’s Pizza Bar is always much larger than yours, so he can afford to win a few rounds more than you; as long as he doesn’t come out ahead. Also, there are pepper and hot sauce cards you can use to either negate the pizzas he eats or lower his Pizza Bar. To help your own chances, collect cards with a “II” on them during the game proper, then use them in the contest to double the value of your card’s number. When your opponent busts out a 2, lay down a 3 with your double-value card and you get 4 pizzas for the price of 2. The Contest is the most unique aspect of the game, but it drags at times and you can’t skip it to go to the next stage. Should you lose the contest to the alternate universe Noids, you’ll have to play the stage it’s attached to all over again. When all you want to do is progress, that’s a spicy sausage that shoots straight for the heart.
It’s to Capcom’s credit that Yo! Noid kept my interest throughout, despite my hatred for the main character’s design and the occasionally cheap gameplay. I still wish us Americans would have received Ninja Hanamaru in its rightful form; perhaps the cheap spots that so troubled me with the Noid would have been more tolerable controlling a ninja. Hanimaru and his Hawk of Justice may not have successfully made the voyage across the Pacific, but the spirit of their adventure lived on. Even if it took a two-bit pizza-loving psycho to make it happen.
B-
The following two tabs change content below.