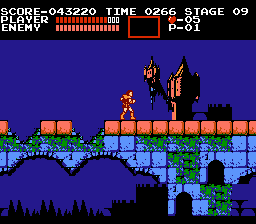 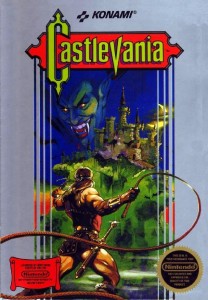 The game was originally supposed to be titled Conanvania, but Konami came to their senses and gave Simon a whip. 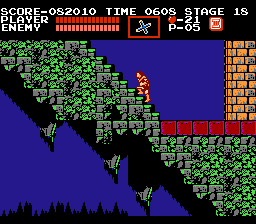 Playing through every NES game really puts Nintendo’s entire gaming output into perspective. Games traditionally failed on the NES, not because they weren’t marketed properly like today, but because they were bad games. Read my Castelian and Castle of Deceit reviews to see why no one has ever heard of those games. Castlevania was released in 1987 for the Nintendo, and, if I’m not mistaken, was one of the first side-scrolling action games for the NES along with Kung Fu, Ghosts N Goblins, and the original Super Mario Bros. Out of all the aforementioned games, only Mario and Castlevania truly live on today. Kung Fu and Ghosts N Goblins were hardly bad games for their day, and in fact, sold quite well, but Castlevania was a huge success. It’s for good reason: even 24 years later, Castlevania is one of those Nintendo games, like Mega Man or Contra, that possesses the ability to still feel fresh, exciting, and challenging on every playthrough.

Anyone who’s ever been moderately interested in the Castlevania series has read a thousand retrospectives on the series; articles on why the first game was so influential, unique, interesting, fun, on why it launched a dynasty, etc. Even if you didn’t read past the entry on Super Castlevania IV in said retrospective, everyone knows the story and the gameplay behind ¾ of the series. Some member of the Belmont goes to take on Dracula and his several reincarnations. Later, in the GBA and DS games, they introduce several new characters and soap opera plotlines, but that’s none of our concern. What is important is each person’s take on their time with Castlevania. In other words, where were you when you first played one of the original Castlevania games on the NES? So in a sort-of, kind-of break from tradition, I would like readers to leave a comment, stating their first experience with a Castlevania game. I’d prefer if your first experience was with Castlevania I-III on the NES, but beggars can’t be choosers. Any reminiscences will do! 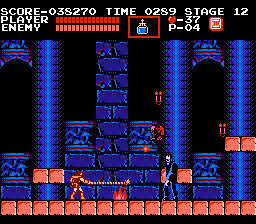 Frankenstein’s monster fears neither man nor whip nor hunchback.

When I was a child in the early 90s, I never tried the original three for the NES or Super CV IV for the SNES, and I honestly can’t say why. If I had to guess, though, I’d say a part of me was scared. I read game magazines and hint books at the time, and I knew Castlevania games were hard and not for the weak at heart. Don’t get me wrong, I could handle a challenge as a kid. In a way, my argument implodes on itself because I know I rented every Mega Man game about a couple dozen times. I just could never beat really challenging games over a three-day rental period at Blockbuster, and I suppose, Mega Man, although challenging, was covered in a shroud of cuteness, which made him appealing to me. Despite his power, no one’s going to look at Mega Man’s adorable face and be terrified. Castlevania was dark, disturbing, mysterious. While my family was Christian, they wouldn’t have objected to me playing the Castlevania games, so that excuse is out. Also, I enjoyed scaring myself, so Castlevania seems like a series I would have been drawn to. ALL THE PIECES FIT! Alas, I will never know my reasoning. While I later tried all three games on an NES emulator in the early 00s (yes, I was behind), my first Castlevania game was indeed Castlevania for the N64. Like many pitiful N64 owners, I swallowed up anything that looked remotely good. I hated the original Castlevania for the N64, but later I tried the “director’s cut” Legacy of Darkness and found that much more enjoyable for reasons I can’t recall. Nevertheless, neither of those games are solid first entries in the series if you’re looking for a place to start.

Yes, all of the retrospectives are true: the original Castlevania is a masterful game and a love letter to monsters in general. Its six levels are intricately designed to make you feel like you’re traversing the grounds of an evil castle in Transylvania. Instead of simply latching onto vampire mythology, the game throws every creature in the book at you: mummies, medusa heads, large bats, witches, and for flavor, Frankenstein’s monster. For 1987, this was high-quality gaming that only the NES could provide (or, if you were in Japan, the Famicom Disk System). Beautiful atmospheric graphics, mostly tight controls, and some of the best music found in gaming, then and now, provide an all-around excellent experience. Complaints? When enemies hit you, they send you flying backward. Since there are a lot of flying enemies and a lot of precarious jumps to make, simple hits can lead to many instant deaths. If you’re a fan, you know all of this already. If you’re not a fan, why are you still reading? Go play Castelian or something. 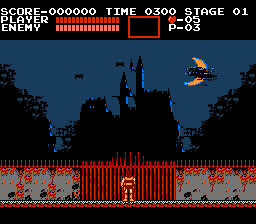 Thanks to vgmuseum.com for these screencaps.