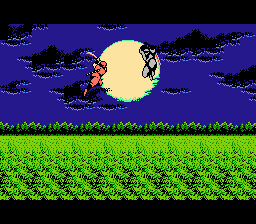 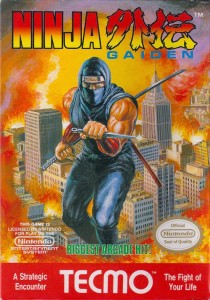 Ryu leaves New York in flames? Yeah, I could see that.

All they want is some kisses. Some flaming sword kisses.*

Until Ninja Gaiden was released, 8-bit gamers had to get their story fix from RPGs or not at all. Stories for action and platforming titles were scant and usually involved some iteration of the “save the princess/the world/your mom” variety. For better and for worse, Ninja Gaiden introduced a new way of telling a story to the gaming industry: scripted, animated cut-scenes. Cut-scenes are now taken for granted and expected, but at the time, nobody knew what they were. It’s hard to overstate the impact of having bits of story bookend almost every level, and I’d be willing to bet even Tecmo had no idea that this cinematic way of telling stories would become the industry standard. In retrospect, Ryu’s quest for revenge against his father’s murderer, complete with plot twists and double-crossing, may not be original, but it was told with a visual flair unlike any gamers had seen at the time. The storytelling combined with the furious (and often infuriating) gameplay left gamers stunned, and today, Ninja Gaiden and its sequels are considered some of the most influential titles to emerge from the NES.
As the ninja Ryu Hayabusa, you travel to America to find the man who killed your father. In the process, you learn about an evil villain named “Jaquio” who, naturally, plans to take over the world using an ancient demonic power. Each stage is a set-piece, where you must overcome barrages of repeating enemies, all with different movement patterns and attacking styles. Your only help is your trusty sword, and the secondary weapons you can find in each level; such weapons include a flame shield, throwing stars, flame bursts, among others. Memorizing the enemies placements and movement patterns are key to conquering each level, as is learning how to jump effectively. There are some absolutely ridiculous jumps the game asks you to make, especially towards the end. Believe it or not, all long jumps can eventually be conquered through multiple deaths, profane outbursts, and devoting tons of time, precious time. What makes Ninja Gaiden for me is the pacing, of both the game and Ryu himself. It’s one of the fastest platforming series on the NES, if you know what you’re doing. No level is too long, and Ryu’s movements feel incredibly light and quick (as they should, since he’s a ninja).

The opening scene is still astounding, almost twenty-five years later.
Despite its influence, Ninja Gaiden still has its detractors. Some say it’s merely a sped-up version of Castlevania, which is an understandable argument. While Simon Belmont doesn’t move nearly as quickly as Ryu Hayabusa, the secondary weapon system, the constant barrage of enemies with differing patterns, and the cinematic feel all speak to Castlevania‘s overwhelming influence; even when Ryu gets hit, he flies backward, just like the Belmonts do in Castlevania (thanks for including that frustrating nugget, Tecmo). Others just complain about the blistering difficulty, especially in the latter half of the game. In my opinion, though, Ninja Gaiden expects you to overcome its challenge, and gives you the tactics to do so, unlike some games that barrage you with overwhelming difficulty to compensate for poor design. It’s a challenge that bears great rewards, if you can take it.

Yeah, Ninja Gaiden is pretty cool, though it’s nowhere near my favorite series for the NES. It has one standout blockbuster (Ninja Gaiden II), one solid, influential title (NG1), and one so-so ending (Ninja Gaiden III). But, much like with the original Legend of Zelda or Donkey Kong, one can’t deny Ninja Gaiden‘s impact on the gaming world at large; even if Ryu is Simon Belmont, ripped on speed, and wearing a ninja mask.

*thanks to vgmuseum.com for these sweet screenshots.