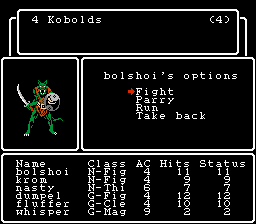 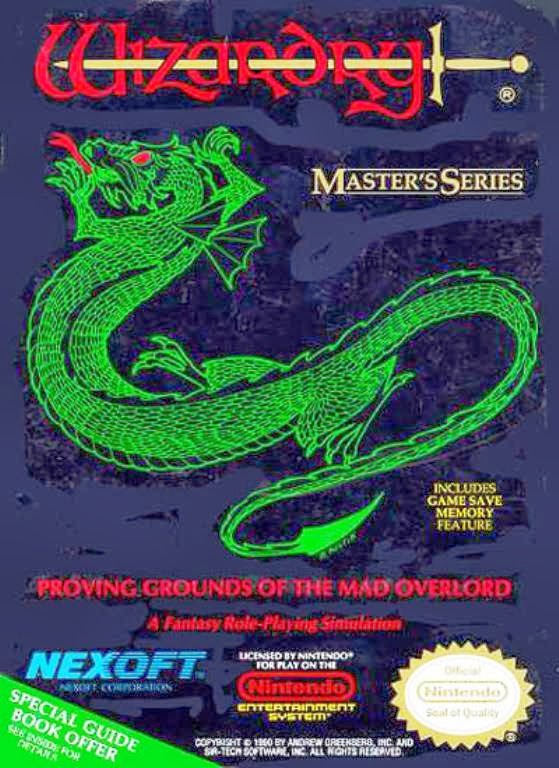 Tell me more about this Game Save Memory Feature!

Take back what’s yours, bolshoi.

If you don’t know about the Wizardry series, here’s a brief breakdown: it’s one of the most influential RPGs of all time, inspiring both the Dragon Warrior and Final Fantasy series; it was the first role-playing game where you controlled a party instead of a lone adventurer; it also had full color graphics at a time when text and black-and-white adventures ruled the land. It has seven proper sequels, the last of which was released in 2001, but there have been plenty of spin-offs released since then, many of which are Japan-only. For most long-time PC gamers, though, the series heyday was in the ’80s and early ’90s. At the time of its release, there was nothing else like Wizardry. Thirty years later, the gaming landscape is teeming with games of all genres that owe a debt to its simple, effective structure.
In Wizardry, you make a custom party of up to six characters to explore a ten-level dungeon. There are five races – Human, Dwarf, Elf, Gnome, and Hobbit (!) – and four classes – Fighter, Mage, Cleric, and Thief – to choose from. The balanced party is the best (three fighters, and one Mage, Cleric, and Thief respectively), and six characters from the get-go. Once you’ve bought the appropriate weapons and armor for your party, you’re off into the dungeon. Now, there is no dungeon map, which sounds insane until you remember that Wizardry is an old computer game. If you want to know where you’re going at all times, you’ll have to bust out some graph paper and make maps yourself. Map-making might hit some nerdy sweet spot you didn’t know you had, but if you’re like me, it’s more of a cumbersome chore. Unlike more recent dungeon crawlers that ease you into their labyrinthine structures, Wizardry is difficult from the get-go. Even if you buy the right armor and weapons for your characters, there’s a good chance one or more of your people will die in an early battle because the foes are too strong. You can revive your people at the church for a “small” fee, but sometimes it’s best just to run away if you think there’s a chance of death. Treasure chests are also dangerous: most of them have a trap (which is why it’s always good to have a Thief along), but they’re worth opening for rare items and such. There’s a couple different options to save, but it should be noted that, like most dungeon crawlers, you can’t actually save in the dungeon.
Proving Grounds of the Mad Overlord was ported to the NES in 1990, almost a decade after it was originally released in 1981 for the Apple II. Such a long time between ports usually spells disaster, but Game Studio did an admirable job at updating the necessary features – graphics, controls – while keeping the foundation the same (though the option ‘Select Switch’ allows you to view the game’s dungeons in vector graphics, like the original Apple/PC versions). One aspect that really impressed me was the smooth gameplay. It’s possible to damn near run in the dungeons, and navigating between the game’s many menus is seamless. Other PC-to-NES ports like Might and Magic or Ultima are almost defined by how slow they run, but Wizardry doesn’t miss a beat.
Is it worth playing a twenty-year-old port of a thirty-year-old computer game? If more contemporary dungeon crawlers like Etrian Odyssey have you interested in the genre, you might enjoy exploring the roots here with Wizardry. It’s an archaic, informative experience made a little more bearable by the streamlined porting.
B
The following two tabs change content below.