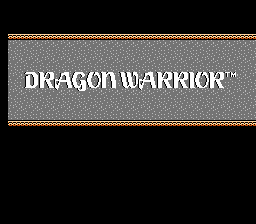 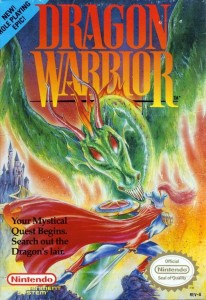 Before Skyrim, Dragon Warrior was as big as they came. 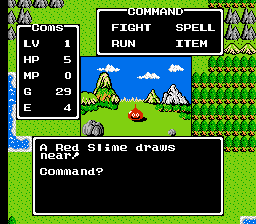 Who would have thought in 1986 that the Slimes would become ubiquitous with Dragon Warrior/Quest?

The name Dragon Warrior carries very little cachet with anyone other than Americans who grew up playing RPGs on the NES. The name Dragon Quest is known by every Japanese man, woman, and child. Yet, both are one and the same series. In Japan, Dragon Quest is beloved by all for its tried-and-true game mechanics, wonderful character designs by Akira Toriyama, and charming stories by series creator Yuji Horii. In America, the Dragon Warriors were generally seen as paltry substitutes to the real RPG series, Final Fantasy. This is a shame. Although the graphics and mechanics were viewed as outdated even in 1989 when the game was released, there is a quaint charm to the game’s simplicity that I find far more unique and entertaining than Final Fantasy’s constant reinventions.

There’s very little to explain about Dragon Warrior: You’re a hero given the task of defeating the Dragonlord and saving the princess. You grind and grind and grind some more until you have the strength to face the Dragonlord and verily beat him unto death. Thankfully, the battle interface is surprisingly smooth. The randomness of the battles, while relatively annoying by today’s standards, were common back then. For those that have not attempted this magnanimous quest, I have included a journal below of my most recent exploits within the game. It’s been at least ten years since I last played it, though, so please be merciful in your judgments of my playthrough…
5 minutes: Comstock is my hero’s name. Not sure what it means, but it just came to me and it fit perfectly. The king’s giving me a speech about who I am and what my mission is: save the princess and kill the bad guy? I’m only one man, king! He sure does like to ramble and use ye olde Englysh. Why is there a separate menu option to open a door or use the stairs? This isn’t a computer RPG, Enix. Get with the mid-Eighties console scene. The graphics are horrendous, but charming in a squatty, pixellated way. Why are there no shops or anything in the main town? I have 120 gold and I’m looking to spend, spend, spend. Guess I’ll try and find some shoppes in a different town.
10 minutes: Good thing the town Brecconary is right next door. Maybe they’ll have some good items. Well… with my 120 gold, I can either purchase leather armor or a club, but not both. If I had 10 more gold, I could have both, which means I need to do some fighting. Enemies always have gold because they like to loot the corpses of already vanquished warriors; bastards.
20 minutes: Well, I bit off more than I could chew. After fighting my fair share of Slimes (and conquering them, like a boss), a Drakee came along and plowed me to “Thou Art Dead” status. To be fair, the Slimes hardly took off any damage or they would just biff their attacks completely. I assumed I could handle my Drakee and get my new club. Alas, since I died, half my gold has been taken as penalty. Now I have to grind even more, DAAAAAAHHHHHH!!! WHY AM I SO WEAK, WHY DO I ONLY HAVE 15 HIT POINTS TO START, WHAT KIND OF A WARRIOR AM I!
30 minutes: Apparently I suck at playing Dragon Warrior. It would seem that a weapon should have been my first purchase. Comstock can’t hit the broad side of a slime to save his life. How can I miss all these attacks??? Why did I pick the wrong piece of hardware to purchase first? Oh wait, I know: I should have purchased the game back in 1989, as it came with a mini-strategy guide to help stupid Americans like myself. It’s time to start over and buy a club. Hopefully it will guide my blows square and true.

50 minutes: This game is brutal. I started over (with the name Blahilk – sorry, Comstock) and bought the club first, which definitely helps to hit enemies. Unfortunately, because of your low hit points, it doesn’t take more than two or three battles before you need to go drop six gold at the inn to replenish your health. What this amounts to: more grinding. In order to buy more equipment, you need more gold, which means you need to fight. In order to continue fighting and not lose half your gold should you die, you need to sleep and regain your health at the inn, which costs six gold. It’s a vicious, brutal cycle that will require hours of steadfast perseverance. Hours that, at this moment, I do not have to spare.

Accepting an antiquated form of what we call an RPG is essential to enjoying this game. I personally have a fondness in my heart for the original Dragon Warrior, outdated though it may be. There’s something about grinding in the open fields that brings me back to a simpler time. I won’t say it’s for everyone, especially more impatient gamers. I would actually recommend the Game Boy Color remake Dragon Warrior I+II if you wanted to delve deep into the game, as it updates the graphics and makes the battles faster. If you’re a die-hard NES junkie and you haven’t explored one of the most influential RPGs of our time, you’re doing yourself a disservice. Drop a few dollars and buy this landmark game.