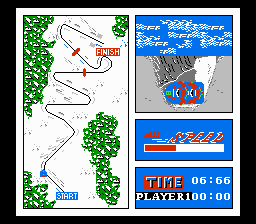 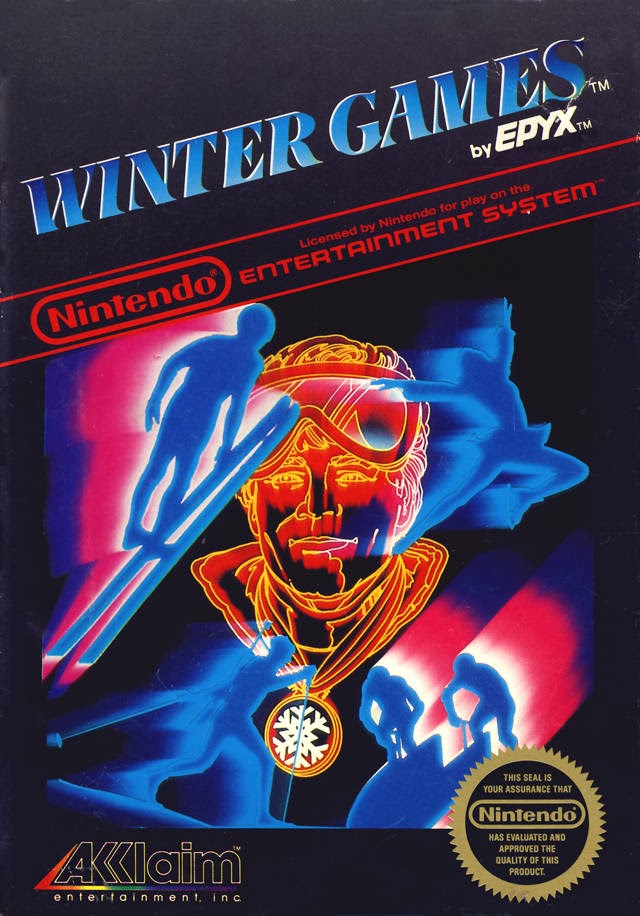 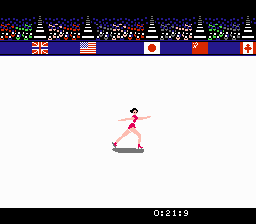 Enjoy the attention while it lasts, honey.

The best part about Winter Games might be the snazzy retro box art. Look at it! It feels Kraftwerkian in its color choice of deep blue and orange neon. Winter Games itself is much less of a success, a Commodore port half-heartedly shoved onto the NES with little regard for the console’s abilities, particularly the controls.
There are only four events to choose from: Hot Dog Aerials, Speed Skating, Figure Skating, and Bobsledding. This is strange considering that the original game had eight events, but given the quality of these four events, I doubt anyone’s mourning in sackcloth and ashes for the other four.
Since the controls actually work for Hot Dog Aerials, it’s the best event by default. Ski off a ramp and do some tricks using the D-pad. Make sure you have enough time to land on your feet, though. Otherwise, the judges will mark it zero. The tricks are simple enough to pull off, and it’s easy to get a 7.0 or above, so hooray for Hot Dog. Speed Skating makes you pound left and right on the D-pad back and forth. The computer always wins at least ten seconds above your time, but the real losers here are your poor fingers. Screw Speed Skating.
Figure Skating, however, is by far the worst event due to the precise-to-a-fault controls. Hold down the D-pad in different directions while pressing A to lift off; that’s the easy part. Pressing ‘A’ right as you come down so you’ll land on your feet? Not so much. The figure skater seems to choose when she’ll respond to the button presses, and God help her, she never landed without taking a spill. Back to figure skating camp! Bobsledding is a strange beast. You hold ‘Down’ to decelerate, and use ‘Left’ and ‘Right’ to turn in the appropriate directions. If you don’t turn and decelerate at the right angle, you’ll crash and have to try over. Getting down the hill is a triumph in and of itself. Don’t be surprised that your time sucks, even if you make it.
Who were these Winter Games made for? Gaming enthusiasts who have the patience and tenacious buttocks to wrestle with the game’s horrid controls? Actual athletes from the Winter Olympics? I bet it’s easier to qualify for the Olympics than to beat the computer’s high scores on this frosty dungheap. If you have to play any version, try out the original Commodore 64 game; I’ve heard good things. The NES port is dishonorably disqualified.
D-
The following two tabs change content below.