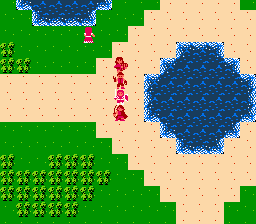 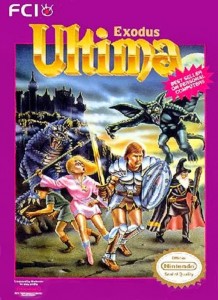 The cover looks like an off-Broadway theater production manned by sitcom rejects.

Ultima: Exodus is the third of nine games in the long-heralded, predominantly PC series Ultima. But it’s the first to be ported to a home console, and while I haven’t played the original PC version, methinks FCI didn’t do their porting homework. Exodus on the NES was made to be played on a PC: from the cumbersome menu selection to the awkward sorta real-time combat system, the controls are strict and sometimes unforgiving. Pressing ‘B’ brings up the Menu, and pressing ‘Select’ brings up the second Menu. If all you want to do is pick up an item or talk to someone, it’s not bad, but God help you if you want to re-arrange your party, their weapons, or items. Menus in battle are touchy, as well. You can only attack an enemy if your character is pressed against them. One would think that assigning attacks to the D-pad would be a wise choice, but no, if you want to fight, you have to bring up the menu with ‘A,’ then select the Fight option; the D-pad is only for moving. Also, unlike most RPGs, you can’t cancel your moves, so if you accidentally hit the D-pad to the left instead of pressing ‘A’ to bring up the menu, ’tis your “ultimate” loss.
The controls are my biggest pet peeve, but there is another design option at play that aggravated me during my brief playthrough: you need food to survive. If your party isn’t well-fed, they’ll take damage just by walking. Fair enough, if you have the money to stock up on food. But money comes mostly with fighting, and lots of it. You also need money to equip your party with armor and weapons, and if you’re far from a town and you’re out of food, the damage you take from both walking and fighting will overwhelm you. Like all good old-school RPGS, both PC and console, you’ll need to level up your party a bit before embarking into any dungeons. Deciding whether to eat or buy your warrior a shiny new mace will be the option ever before you; at least until you get out of those early levels.
Poor controls and constant eating lessen Exodus‘ appeal considerably for me, but should you patient old-school gamers consider it? Probably! Just not on the NES. Exodus has a lot to offer: customizable party with eleven different classes, and five different races, and the battle system, though frustrating, was groundbreaking for its time (“real-time” battles in ’83? Shut your mouth!). And I’m sure there are other features that I didn’t get far enough to appreciate. But boy, would the game work better with a mouse and keyboard. To me, Exodus functions as a history lesson more than an immersive gaming experience. My comrade-in-arms Matthew Conway pointed out on Twitter that the Ultima and Wizardry series were hugely popular in Japan, inevitably influencing Dragon Quest and Final Fantasy, among other RPGs. Roaming through Exodus enables you to see how influential the game was, from the dark monsters on the overworld map (Zelda II!) to the town layouts (Dragon Warrior!). As for me, I’m content to know Exodus existed so that better franchises may come from its half-rotted corpse. I never need or want to play it again.
The following two tabs change content below.