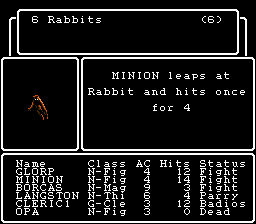 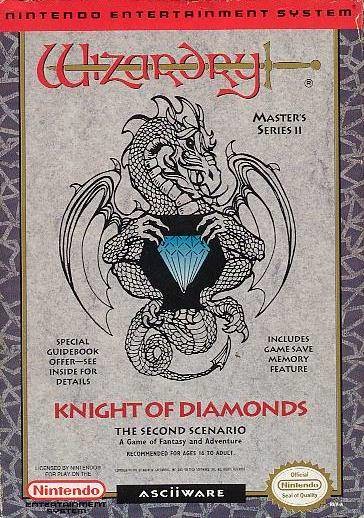 No quips necessary. This is a great cover.

“Second Scenario” indeed. Wizardry: Knight of Diamonds isn’t so much a sequel as it is a slight upgrade over the first; a Wizardry ’92 versus Wizardry ’90 if you will. If you’ve played the first one, you know what to expect: make a custom party of six adventurers to loot, plunder, and pillage a dungeon. The first game’s dungeon had ten levels, half of which could be ignored by players and still finish the game. Knight of Diamonds has a dungeon with six levels, all of which contain a piece of the Knight’s armor required to complete the game. Other than that, it’s fighting and spell casting per usual. Graphics and menu navigation/options are exactly the same. Boltac’s Trading Post, the Temple of Cant, Gilgamesh’s Tavern, etc. have all returned.
Interestingly, the feature that distinguishes Wizardry II from the first game is absent from the NES version. In the original Apple/PC version of Wizardry II, you imported your characters from the original Wizardry. No options were given to create new characters. Wizardry II‘s dungeon also presumes you have level 13 or above characters from the first game; if you didn’t, it would be almost impossible to progress. This masochistic design is part and parcel with the dungeon crawler genre, but understandably, some players were still pissed that there wasn’t a way to play the game with all new characters. Later versions, including the NES port, amended the game with the ability to custom make or use pre-made characters. No matter what characters you use, though, Wizardry II is just a new dungeon, nothing more. That’s all I need, but those who crave complete overhaul with every sequel might be disappointed.
B
The following two tabs change content below.