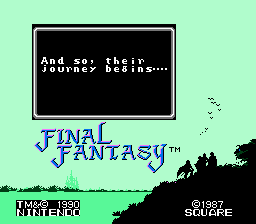 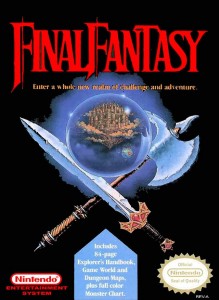 This, friends, is how you do an RPG cover. And look how much stuff you got with the actual game! Nowadays, all that would cost you an extra thirty bucks. 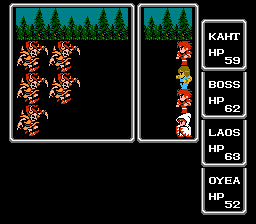 Totally the trolls from “Troll 2”

I want to get through this entire review without talking about 1) Final Fantasy and its relationship to Dragon Warrior (much like every other NES RPG, Final Fantasy was heavily influenced by Dragon Warrior) and 2) the Final Fantasy series as a whole. The latter would take forever and involve a lot of confusion and probably some swearing. The former would involve many back-and-forth comparisons which would get old very quickly. I want to focus on Final Fantasy by its own merits, as the game itself does have a lot to offer. That being said…
Final Fantasy is a great RPG and arguably elevated what RPGs could and should be on the NES. Your character sprites are charming and cool, the music is sound, the battle system is fun, despite it not being super in-depth. The game itself is huge. If you want to really make your characters ultra powerful and find the best items and such, you’ll be devoting a good 50 hours to it. What really sets FF apart, though, is the customization of your characters. For the first time in any NES RPG, you could choose to have different classes. Whether you wanted to be an offensive powerhouse and have four fighters on your team, or mix it up with a fighter, a thief, and a white and black mage. The choice was yours. To even have such choices felt unprecedented, but I believe it’s one of the main reasons people keep playing the game after all these years, and why the original Dragon Warrior feels so antiquated in comparison.
This is part 2 of my confessions: I haven’t played the game in full. I’ve started it about five times and each time get sidetracked with life or other contemporary games. While I’d like to sit here and wax eloquent about my favorite parts of the games, I would just be blowing more smoke than I usually do. Instead of pure lies, I’ll regale you with an antidote (nyuk nyuk) of how I first realized that Final Fantasy was special. Everyone knows that, on the title screen, the words Final Fantasy aren’t emblazoned there. I found that strange at first. What self-respecting title screen doesn’t have the actual title of the game there? I began the game, got my characters in order, talked to the king, sighed about having to rescue another princess. I traversed up through the woods and to the old, broken-down castle. To my surprise, Garland – the supposed main bad guy – was already there waiting for me. And I was now fighting him! After besting him quickly and easily, the princess was safe and now I was back in the castle. How queer, I thought. I just rescued a princess in about fifteen minutes and it took about fifteen hours to do it in Dragon Warrior. Obviously, I knew the game wasn’t over, but it was a delight to see them turn such a standard RPG convention – and really, a NES game convention – on its head. Well, the king repaired the bridge to cross over into other lands, so I took my leave and ventured across. The screen went dark. I assumed my “cartridge” had glitched. But no. It was the true title screen interrupting my play and telling me what my real journey would be. Epic music! Restoring orbs! A beautifully lit background that showcased my party in silhouette standing atop a mountain! Truly this would be the fantasy to end all fantasies!
A
The following two tabs change content below.