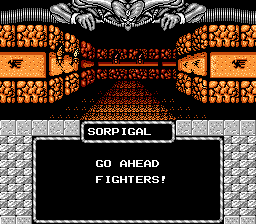 This is one gnarly looking cover. Why is your party pint-size?

Go ahead, Fighters… see what happens when you waltz down that corridor.

Unless you like your RPGs on the slower end, my guess is, there aren’t many of you who revisit early Japanese or Western-RPGS. Even when battles and plot progression and honest-to-God stories start to appear around the early-to-mid 90s, said innovations were still new and untested. Twenty-plus years later, it can be hard to remember why these games were cutting edge, and thus, hard to appreciate. This is particularly the case with Might & Magic, a slightly remixed adaptation of the original Apple II game. American Sammy did an admirable job not only porting over the game, but improving on its computer counterpart in a lot of ways. Nevertheless, these touches don’t cover up Might & Magic‘s archaic dungeon-crawling, tedious party micro-managing, and vague non-linear progression.

I’ll admit, I’m not the target audience for an old-school dungeon crawler, much like I’m not the target audience for in-depth Koei or sports sims of any kind. However, as I’ve stated in past reviews, I like to think that I can appreciate the quality that goes into games I don’t particularly desire to play. Might & Magic is well-crafted, with a large amount of quests to complete, magic spells to learn, and monsters to slay (sometimes you can run into twenty-strong battles – Woah Nelly!). While you can only have six people in your party at one time, you can amass quite the roster of paladins, clerks, mages, etc. each with their own set of skills and traits to build up. Don’t get the impression that Might & Magic does you any favors either. This game will test your mettle and you will grind for days (or what will feel like days…) to level up your party.
If all this sounds like a hoot and a holler to you, perhaps you should seek out Might & Magic. I wish I could explain why a game like the original Dragon Warrior, which is as old-school and antiquated as they come, still intrigues me more than this. Perhaps I lean more towards Japanese RPGs (true – at least until the mid-Aughts) or perhaps I just have a hard time adjusting to obviously computer RPGs being adapted for the NES (the control scheme in this game begs for a mouse), even if the adaptation is well-done. But I just can’t get on board with Might & Magic. As far as I’m concerned, the Secret to the Inner Sanctum can stay a secret.
C-
The following two tabs change content below.