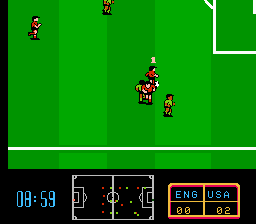 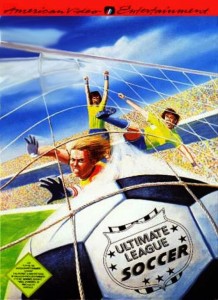 The ultimate average soccer title. Watch out for Gene Simmons in the background.

If there were such things as honest taglines in the entertainment industry, Ultimate League Soccer‘s would read: “It’s a soccer game. Fancy that!” Pick from one of eight teams, each with their offense, defense, speed, skill, accuracy, and experience numbers displayed. Germany is the best, USA is the worst, and unlike many NES sports titles, the numbers actually affect each team’s performance during the games proper. USA’s offense and defense might be terrible, but boy can they run a soccer ball! Germany’s too powerful for their own good (historical commentary?), which makes them a great team for beginners like me. It’s easy to switch between players while passing the ball, but be forewarned, the ball animation is janky and slow compared to the players’ movement. It’s jarring at first, but easy to grow accustomed to. Options are limited: no team names, no players from the early 90s, but that’s to be expected on a game this early (and unlicensed). You can pick from three starting formations, and none are better than the other; it’s all a matter of preference. And that’s that. Not as entertaining as Nintendo World Cup, but praises be, better than the worthless Goal! games, Ultimate League Soccer reigns supreme in the “mediocre” section of the NES soccer pantheon.
C
The following two tabs change content below.