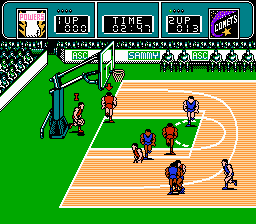 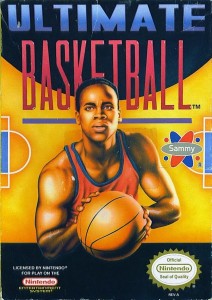 You can do better than this game, kid.

You’ll be spending most of your time on the side of the court, wishing for a better basketball experience.

For whatever reason, basketball is a hard sport to replicate well on the NES. Hoops, Jordan Vs. Bird: One-on-One, Roundball: 2-on-2 Challenge, etc. are all prime examples of how not to program a basketball game. Ultimate Basketball does nothing to change this trend, though not for the reason one might expect. Typically, when a sports game fails its audience, it’s due to the controls. They might be unresponsive or feel too sticky or too loose, or a combination of both. Either way, bad controls will ruin most games, but particularly sports titles. Ultimate Basketball just has ridiculous difficulty. Even on the lowest difficulty setting, you will have an impossible time making a point. If you pass to a player further ahead on the court, the computer steals the ball. If you stand to close to a player, you get called for a penalty. If you decide to dribble down the court to the hoop, the computer will steal the ball out from under you. Pass, run, it doesn’t matter. The computer has godlike abilities and will not hesitate to show off their skills. Never mind that each team is supposed to have strengths and weaknesses. They all play more or less the same: better than you. I suppose you could play two-player and not deal with the cheap computer. The game would then morph from complete worthlessness into semi-competence. Then again, Tecmo NBA Basketball is a great game for one and two-players alike. Forgotten Ultimate Basketball once was, forgotten it should be again.
D-
The following two tabs change content below.