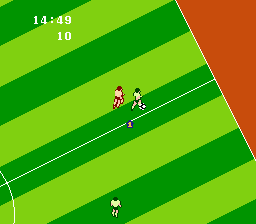 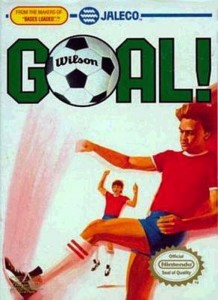 Is that kid flinging us the bird?

Wow, look at that there… not sure what’s happening.

If you suck at soccer and you know it, clap your hands! I used to love soccer when I was a kid, but haven’t gotten to play it since, oh, first grade. This leads me to believe that my soccer skills – whatever they were then – have all but deteriorated over twenty years. But that’s life, and in life, we get back on our feet, or forbidding that, we play video games.
Goal! is probably one of the earliest soccer games for the NES, and as a result, its structure is incredibly simplistic. There are four options on the main menu: World Cup, Tournament, Shoot (competition), and Continue (which I believe continues your progress from the World Cup. Of these, World Cup and Tournament are actual gameplay. A Tournament is a series of games held between states in the U.S., while the World Cup is… well, the World Cup. The gameplay is pick-up-and-play, which is good; no obnoxious stats or sim management stuff. The only problem – which ruins the entire game – is the passing system. When you pass the ball, you shoot it in the direction of your other players, but not actually to the other players, like you would in any basketball, baseball, or football game. I can’t tell you how many times I would have gotten goals(!) had the ball just gone to the person I assumed I passed it to. Trying to be a one-man show and carry the ball all the way across the field without passing, results in the other team crowding your grill and slowing the game way down. Perhaps I should just take up soccer again instead. Exercise, fresh air, and when I pass the ball, the likelihood of my team mate getting it is higher than in Goal!
D
The following two tabs change content below.