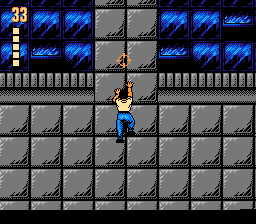 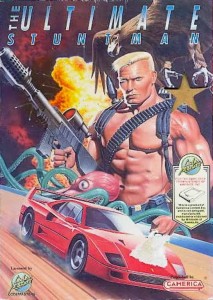 Pretty sure that’s an airbrushed Arnold.

He wouldn’t be the Ultimate Stuntman if he couldn’t climb up a building with his bare hands.

Ultimate Stuntman is an odd, unpolished game that manages to entertain in spite of its shortcomings. The first thing you’ll notice is the variety of genres on display. There are driving stages a la Spy Hunter, action stages, vertical and horizontal shoot-em-up portions, large boss battles a la Contra, and bomb diffusion puzzles. Codemasters went all out. Genre-mixing often makes a game feel patched together, like the developers didn’t know what they wanted the game to be. Stuntman actually benefits from it.
While the stages are fun, they’re not very deep. Had any of these styles had been expanded into a full-length game, one would grow tired from the monotonous gameplay (particularly the action/platforming stage – collecting keys is riveting and all, but I couldn’t imagine doing it over the course of an entire game). Because each genre is delivered in bite-sized portions (no two back-to-back levels have the same gameplay), Ultimate Stuntman excels. Two annoyances: the needless time limit, and the, at times, overwhelming difficulty. The latter is to be expected in an NES title, I suppose, but the former forces you to collect clocks in each stage to extend the time. If you don’t collect clocks, there’s barely enough time to complete each stage, and the game’s difficult enough as is. As a whole, though, these issues don’t lessen the game’s enjoyability. Ultimate Stuntman might be rough around the edges, but its rugged demeanor and devil-may-care attitude will leave you wanting more.
B
The following two tabs change content below.