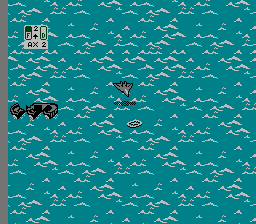 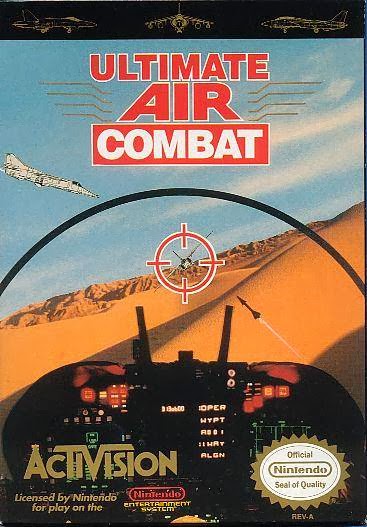 Take that, viewpoints inferior to mine!

Ultimate Air Combat doesn’t screenshot well. I could take just about any picture and it would look like this.

I’ve never been one for flight sims on a home console, but Ultimate Air Combat makes the strongest case for the genre’s presence on the NES. Thirty-seven missions, with names like “Hit or Missile” and “Fort Scragg”! Choose from an F-14 Tomcat, F-18 Hornet, and a Harrier, each with their own missiles and upgrades! Customize your weapons or let the computer equip you! Three cheers for replay value and variety, but the biggest service UAC provides the player is smooth controls. The planes maneuver like butter, even when you’re upside down and careening towards the ocean. The only smudge on the controls’ otherwise impeccable record involves launching missiles with ‘B’ during the first-person air combat portions. Even when I was locked on to a bogey, I had to be at just the right angle for my missile to launch; otherwise, nothing would happen when I pressed ‘B.’ It’s a nuisance that can be worked around (my machine gun shot down planes just fine). Thankfully, it only occurs during air combat, which is always the first part of every mission. The second part involves third-person, 3/4 perspective ground combat – blowing up bridges or shacks or terrorist palaces on the ground. Follow the arrow in the upper-left hand corner, stay low to the ground, and shoot away. It’s almost impossible to die in these sections (even with planes and helicopters shooting at you), so blow up as much as you can for extra points. Best flight sim on the NES? Probably. Superlative adjectives like “Ultimate” aren’t given to any ol’ Tom, Dick, or Harry warfest.
B-
The following two tabs change content below.