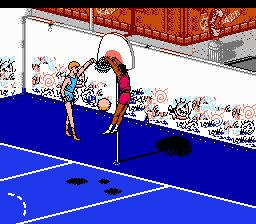 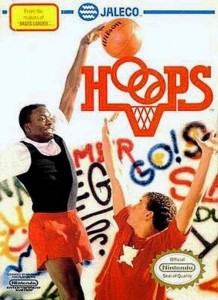 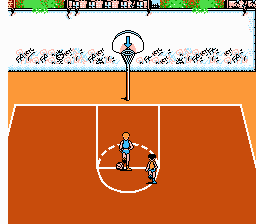 That is a very lonely-looking court.

Hoops is an odd sort: a 1-on-1 or 2-on-2 basketball game that seems to think bare-bones simplicity is the way to go. Normally, I’d agree with it. I don’t think I’ve found a basketball game on the NES that plays above average so far. As far as Hoops is concerned, there’s only so much personality one can give a two/four-man tumble. You either play what amounts to a half-court game of basketball with people who have names like Mr. Doc, Zap, and Wiz (apparently, any person you choose plays differently too, but I was hard-pressed to notice that) or you play “Around the World,” a three-point line competition between players. The latter is boring and the former is merely average. The players control pretty well on the court, but shooting certainly felt harder than it needed to be. There were no fluid shots, only stilted, half-cocked misses. Obviously, if you’re interested in wringing any fun out of Hoops, you’ll need to get yourself a second player. At least then you can laugh at the other player as they attempt – and fail – to make three-point shots, or, well, any shot. But if you’re alone, like me, sucking down a dry martini while crying clown tears, it’s best to leave Hoops on the sidelines. No point in becoming more depressed.
D+
The following two tabs change content below.