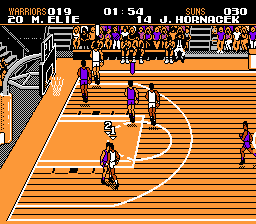 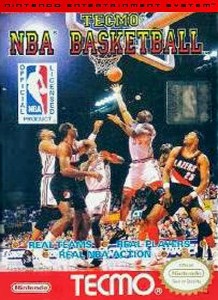 Tecmo NBA Basketball was, at the time of its 1992 release, probably the definitive basketball title on the NES. All of the teams, players, and stats from the ’91-’92 season in NBA basketball are here. There’s a Preseason mode (good for non-basketball players, such as myself), Season Mode (play up to 82 games if your fingers can take that much button tapping) and an All-Star Game mode (best players from East and West represent). Like Tecmo’s other sports games, NBA Basketball is easy to pick up and play. The on-court action is smooth, switching between players is effortless, and the AI is balanced according to the stats (warning: do not pick Sacramento). There can be quite a bit of sprite flickering, particularly if you have a swarm of players in one concentrated zone. Still, given the lack of slowdown, I was surprised by how quickly the players moved (I’m sure it helps that every single player shares a generic sprite template). Based on other reviews I’ve read, NBA Basketball is easy to conquer, once you understand how to block and steal shots from the opposing side. I found the game challenging enough for my lack of skills, but be forewarned, all ye hoop-lovers: the computer might not hold much of a challenge for you. Then again, that’s what two-player is for, eh? Another solid outing from Tecmo, King of Sports (and Sculptured Software helped, I guess).
B
The following two tabs change content below.