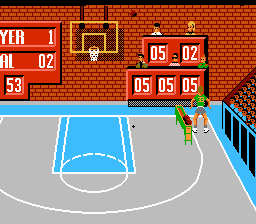 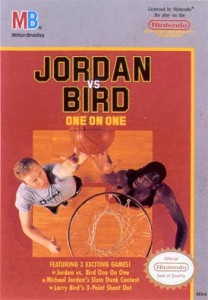 This could have been a Wheaties cover… 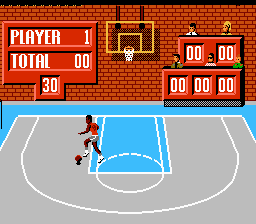 Jordan showing off for the judges.

When two basketball heavyweights from the 80s and early 90s sell their names to a video game, you know they made a lot of money doing it. What you don’t know is if said game will rock thine world. Everybody loves Michael Jordan and Larry Bird, but when it’s just them competing against each other in a basketball court in South Central L.A., how interesting can the game be? It depends on your predilection for various game modes, wherein you as Jordan/Bird face off against Bird/Jordan in a myriad of ways. You can play a regular one-on-one game with all of the whimsy that that entails or you can hit it up, streetball style, and play “to 11” or “to 15.” There’s also the Slam Dunk Contest, with Judge Jordan presiding over his line of dunks. Choose whichever dunk you’d like to do (it helps to actually know how he performs them – my personal favorite is the Dr. J Slam), then execute them in front of a scoring squad. You have to be really precise in this mode and perform the dunk to the tee. Next, there’s Follow the Leader, which has you watching the computer perform a move/dunk, then directly imitating them; perhaps the least essential or interesting mode of the game. Finally, there’s a 3-Point Contest, where the previous controls of the game go out the window. Instead of simply pressing ‘B’ to shoot and watch some million-dollar swish action, you have to hold ‘B’ and press ‘A’ mid-jump to release the ball. You only have sixty seconds to perform as many three-pointers as possible, but don’t be surprised to find yourself beaten. The computer – Bird or Jordan – is relentless in this game. I tried channeling my inner Bird (I am incredibly white), but I still couldn’t steal the ball or do much in the way of defense for the life of me. Was I disappointed? No, because I don’t care if I’m bad at basketball. I had a perfectly mediocre time playing Jordan Vs. Bird. The review is over.
C-
The following two tabs change content below.