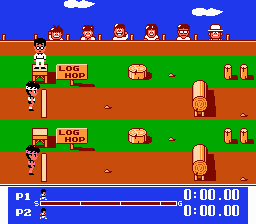 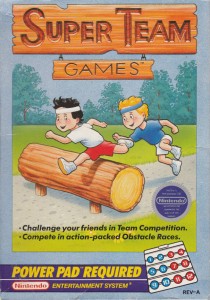 The kids are all smiles… until the log decides to jump back.

This is as far as you’ll get without the Power Pad.

I don’t possess the athletic endurance of a professional runner by any means, but I’d like to think I’m in decent shape. I eat healthy, my physique wavers between slim and skinny, and my job keeps me physically active for several hours at a time. Imagine my surprise when I couldn’t make it through one pathetic obstacle course of Super Team Games without sucking down large amounts of oxygen and water. Either I’m in much worse shape than I think I am, my Power Pad wasn’t responding properly to my pounding feet, or Super Team Games is designed for Olympians.
Like Athletic World or World Class Track Meet, Super Team Games is a series of athletic events designed to get kids off their butts, while keeping them glued to the television. Obstacle Course A dishes out the Log Hop, Water Cross, Wall Jump, and Sprint. These are varied events that you’d think would take advantage of the Power Pad’s twelve buttons. In reality, you’ll only need to run and jump on buttons 5 and 6 for all four events. Now it might seem silly for the Pad to only use two of its twelve buttons, but to Bandai’s credit, limiting the range of your movement helps you focus on your speed. You’ll need to have some serious speed and stamina on reserve in order to a) complete all the events at once and b) beat your opponent. Ollie, the slowest opponent, was still slightly faster than me, let alone Jimmy and Jack, both of whom surely ate an all-Wheaties diet in preparation for the course.
Obstacle Course B changes the formula slightly with Belly Bump Ball, Crab Walk, Bubble Run, and Sprint. Belly Bump Ball has you running on the ever-faithful 5 and 6 buttons, while Crab Walk contorts your body so your hands and feet are on opposite ends of the pad. It’s a nice change of pace before the treacherous Bubble Run. You’re supposed to blow up bubbles on buttons 1 and 2 and keep a solid pace on 5 and 6, all with your feet. Better just to use your hands and feet at the same time and save yourself the trouble.
The Skateboard Race and Super Obstacle Course are the final two one-player options. The latter is both obstacle courses put together all in one shot. If you can take on eight events at one time without passing out, then you have a bull’s heart or ox lungs or both. In the Skateboard Race, you place your feet on the 5 and 9 pads respectively. Tap 5 to get your speed up, and when debris appears, jump and land on 5 and 9 or else you’ll biff and be laughed at by Jimmy and Jack. Not Ollie, though. His low self-esteem allows him to sympathize with your failings.
Unfortunately, I couldn’t find five people and an extra Power Pad to indulge in some of the multiplayer Tournament options. It’s a shame too, since these events look to be the most fun of the entire game. In the 6-legged race, each team has to have three players standing on alternate buttons on the Power Pad. The goal is to move in unison, so if the players are out of sync with their movements, nothing will happen. The Tug of War is the same basic principle: everyone runs as fast as they can on the buttons to lend power to their tugs. The Relay takes the events from the obstacle courses, but instead of one person completing them all at once like some demigod, you pass off a baton to a different player when a new character appears on screen.
The summer-camp atmosphere in Super Team Games is endearing, but my inability to complete the courses without feeling like an overweight chain smoker doesn’t make me want to revisit them. If only there were a practice mode, something that enables you to play one event at a time to build up your stamina. Alas, Bandai disagreed. To paraphrase Curtis “50 Cent” Jackson, you beat the obstacle course all at once or die tryin’. I applaud Super Team for challenging us Americans – both children and adults who act like children – to better ourselves through brief, strenuous bouts of exercise. But I think I speak for millions of Americans when I say, thank God the challenge is optional.