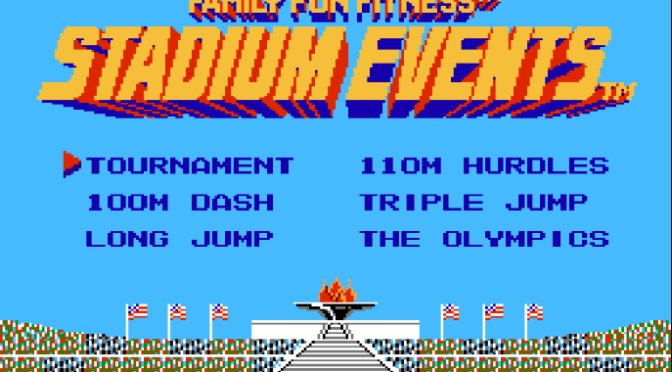 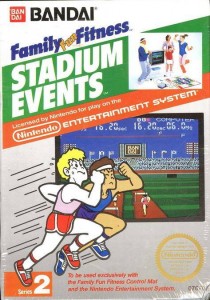 If you have a sealed copy of this, you should come over to my house so we can fawn over it together. 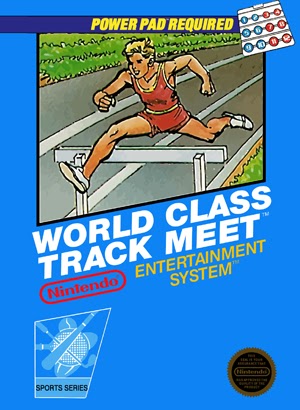 If you have a sealed copy of this, you obtained it from a sorcerer – or a scam artist. No box was ever created for this game. 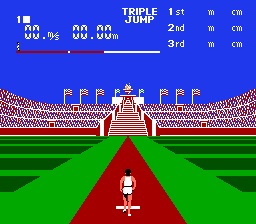 Those stairs represent the height of your eBay bids for Stadium Events. And at the end of the stairs? Pure Olympic payday.

Stadium Events is an unassuming track-and-field game, but most people – including many non-gamers – probably know it as one of the rarest games of all time. The game made national headlines in 2010 when a wayward dreamer made a winning bid on eBay for it. The bid was over forty thousand dollars, which he later failed to pay (not all dreams come true). In April of 2013, a woman found a boxed copy in a North Carolina Goodwill store for $7.99. She sold it for close to $18,000. Chances are, none of us will be this lucky. According to Racketboy.com’s slightly-outdated-but-still-awesome “Rarest and Most Valuable NES Games” article, only 2000 copies of Stadium Events are believed to have been produced. Out of those 2000 copies, only 200 are believed to have been purchased. The other 1800 were recalled, though not because of errors with the games themselves. Shortly after Stadium Events‘ release in 1987, Nintendo purchased the rights to both Stadium Events and the Family Fun Fitness Pad, the accessory required to play the game. In 1988, Nintendo re-released them under different names: World Class Track Meet and the Power Pad. Thanks to the Nintendo branding, the Power Pad and the games that worked with it sold well enough to be, well, not rare at all. For the few who have profited five figures from selling a complete copy of Stadium Events, we’re all jealous of your luck.
Stadium Events and World Class Track Meet are the exact same game, save for the title screen logo and some other minor changes. As such, they can be reviewed as one game, making my quest that much less of a fiscal burden. First: you need the Power Pad for World Class. Yeah, you can emulate, but pumping your keyboard with two fingers doesn’t compare to the blood, sweat, and more sweat that is the full experience. The twelve-buttoned Side B is what you’ll use, despite the fact that World Class is only controlled with two buttons. You and a friend can compete side by side, and up to six people can play through the events. Only two people can compete at a time, however. Your personal space bubble won’t be popped, and your Power Pad will thank you.
On the title screen, choose from four singular events – 100M Dash, Long Jump, 110M Hurdles, Triple Jump – a “Tournament,” or “The Olympics.” The 100M Dash is a mad dash to the finish line against a weak opponent. Unless your legs are weighed down with bricks, you should have no problem finishing first. The Long Jump is a little trickier. Race to the white line, then jump as high as you can before landing back on the Pad. Or you can race to the white line, jump off the Pad, then jump back on to get a high score; the Pad doesn’t know the difference. I considered that cheating until I played the 110M Hurdles. Turns out the Power Pad has a difficult time registering a jump. Since the 110MHurdles isthe 100M Dash with jumping involved, you’ll be lucky if the Pad picks up half your jumps. The Triple Jump is awkward, and perhaps the worst event of the main four. Like the Long Jump, you race to the white line and jump before you reach it. Instead of a leap, make sure it’s a small jump this time. Small jump again after you land from the first jump, then leap into the air (making sure that you don’t care in the process) and land for your score. My strategy: Two small bunny hops, then a giant leap i.e. stepping off the Pad. “The Olympics” is all four events one after the other, while “The Tournament” is a 100M Dash followed by an 110M Hurdles against six consecutive opponents; no breaks, just large gasps for air. Racing, not jumping, is World Class‘ strong suit, so despite the hurdle of the Hurdles, the Tournament is the most enjoyable portion of the game.
World Class Track Meet, like Duck Hunt before it, is a moderately entertaining tech demo designed to showcase a peripheral. The original intent of the Family Fun Fitness Pad/Power Pad was to help chubby kids lose weight (or slim adults like myself get in shape). In that regard, World Class will do the trick if you play it consistently. But if you’re looking for a fuller experience with the Power Pad that involves more than running in place, check out Athletic World. The events have more variety, and you’ll still be out of breath by the time you’re finished.
B-
The following two tabs change content below.