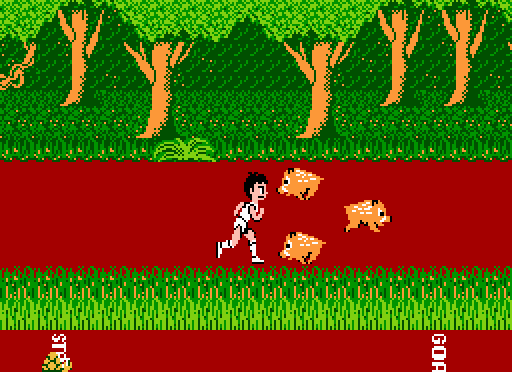 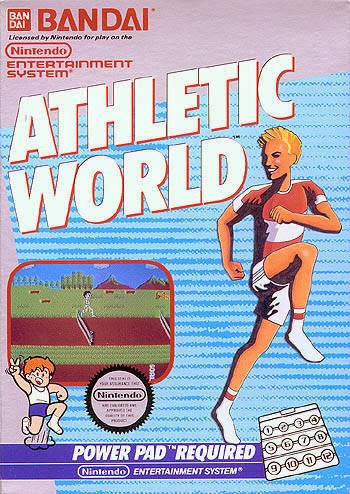 They’re not kiddin’. You’ll need the Pad to play this one. 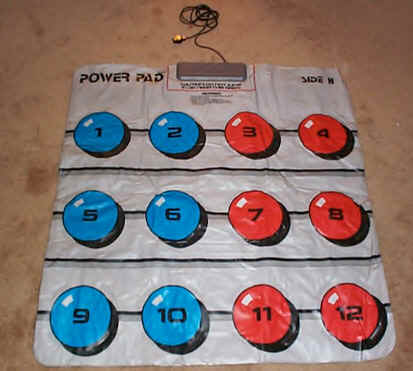 Brother, can you spare a workout? Athletic World can spare several, but only if you have a Power Pad. For those unaware/too young to know of the Power Pad’s existence, it’s a two-sided gaming mat used predominantly for exercise or athletic games. There are eight buttons on one side (labeled Side A) and twelve buttons on the other (Side B), and while that may sound overwhelming, you rarely use more than two buttons at a time. Some of the Power-Pad equipped games test your timing and reflexes, while others, like Athletic World, just make you work really hard. Don’t underestimate the Pad’s power, just because it has bright neon blue and red buttons like some “Jazzercise” mat reject. It’s a beast, and like C+C Music Factory of old, it’s gonna make you sweat.
Athletic World‘s five events – Hurdles, Animal Trail, Dark Tunnel, Hop A Log, and Rafting – use Side A of the Pad. Side A has three rows of buttons: two blue on the top, two red in the middle with two blue side buttons, and two blue on the bottom. For the majority of the events, you’ll be on the two red buttons in the middle; running – the main movement in four of the five events – and jumping are accomplished on these. In “Hurdles,” run as fast as you can, while jumping right before you hit the hurdles. Should you hit them, the athlete will become tangled and need to catch his breath for a moment. “Animal Trail” has you running on a dirt path in the woods, while feral boars chase you down. Depending on where the boars are on the path, use the side blue buttons to move your character left or right away from the boars, then continue running. “Dark Tunnel” will fulfill your cardio regimen or leave you needing an ambulance. Your athlete appears to be inside a pyramid, complete with steep hills that require massive strides. Pound the red buttons for all they’re worth; otherwise, your athlete will slide down the hill, bringing great shame to your family. “Hop a Log” breaks up the formula a bit. Here, you walk swiftly across planks before hopping across a log using the blue side buttons. Make sure to hop on one leg, though. If the Pad registers two legs, you’ll fall in the lake sure as you’re born. Finally, “Rafting” has you jumping and crouching over logs, and maneuvering around rocks in a raging river. Crouching is accomplished by bending down and pressing the top two blue buttons, with both feet still planted on the middle red. “Rafting” is the least strenuous activity, but it gets the most use from the Pad compared to the other events. 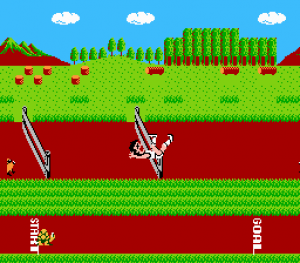 Aw yeah, this takes me back.*
When Athletic World starts, you’re asked for your name, age, and sex. In theory, this allows the game to tailor the gameplay for you, but I’m unsure how much grace the game gives if you claim that you’re a 78-year-old woman. Each event tests you for a different attribute: “Hurdles” tests you for Reflexivity, “Animal Trail” tests you for Agility, “Dark Tunnel” tests you for Endurance, and so on. After you’ve played all five events, you’re given scores in each category and an inspirational message telling you screeds like, “Good Job, Ace Player!” or “Get in the Gym and Make it Count!” My low scores didn’t make me want to work harder, but I appreciated knowing that I was out of shape and needed more practice.
Athletic World also has an expert mode. The five events are the same as the five in the Beginner mode, but they continue to cycle through until It adds extra obstacles, like moles in “Hurdles” (Jump!) and bats in the “Dark Tunnel” (Crouch!). I would caution anyone in our fast-food age to only tackle the Expert Mode if you’ve practiced on Beginner for awhile. The extended length and the added rage-inducing obstacle ensure that it’s not for greenhorns.
Despite the lack of depth and – depending on one’s athletic prowess – quick completability of Athletic World, I still enjoyed my time with the game. Had it a few more events, perhaps something other than mostly jumping and running, it would be looked upon more favorably today. If nothing else, the game serves as a welcome introduction to the Power Pad, a peripheral that paved the way for the Dance Dance Revolution series and the Wii Balance Board, among others. Long live superfluous peripherals!
B
Here are two amusing videos of people using the Power Pad

Videos of people using the Powerpad: B

*thanks to MobyGames.com for the screenshot!