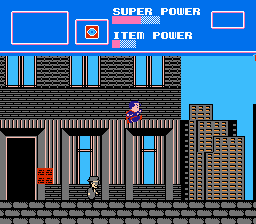 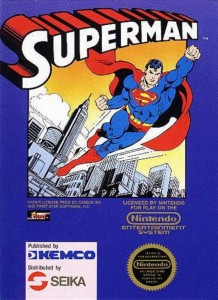 If only Superman was this imposing in the actual game. 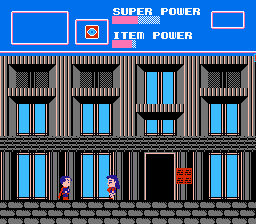 Constructing an enjoyable Superman game should be a straightforward task, yet developers have consistently had a difficult time rendering this iconic character in game form. Superman 64 is the obvious go-to example for how not to design a Superman game, but do not underestimate the inept portrayal of His Steeliness
on the NES. In this particular interpretation of the Supes, anything can hurt him: bullets, knives, grazing the coattail of a mobster. When you first begin the game, it’s easy enough to jump over enemies and their attacks, but watch out when you actually have to punch someone. Superman’s reach is so limited (and his stubby arms only complicate matters) that you’ll almost always take damage when engaging an enemy. You have super powers, like Super Flight, Heat Vision, and, uh, Super Breath among others. Out of all your superpowers, only Heat Vision can kill enemies (Super Breath only knocks out zombies), but it’s limited, as are the other powers. This forces you to have to wobble-punch your way through the game, taking more hits than you give out. Combat is such a huge portion of Superman too; for it to be as broken as it is is unacceptable. Navigating around Metropolis would help ease the pain of combat, if there were things to do other than jumping over enemies. The Metropolis citizens’ snappy dialogue (“Help! I can’t speak English!” being one fine example) is Superman‘s only saving grace. Only Lex can save us now.
F
The following two tabs change content below.