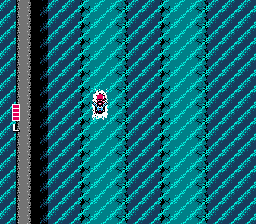 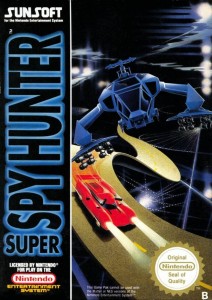 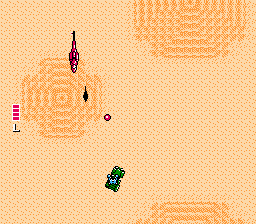 The worst section in an otherwise fantastic game.

Super Spy Hunter isn’t technically a sequel to the pointless Spy Hunter. It’s originally a Japanese game entitled Battle Formula, which, upon coming to America, was adopted into the Spy Hunter family by Sunsoft. It plays similarly enough, however, and if one overlooks its past and accepts it as part of the series, absolves the sins of its foster father. Whereas Spy Hunter assumed driving fast was a solid goal for a game to have, Super Spy Hunter instills the series with purpose by transforming it into a driving based shoot-em-up. Technicalities and questionable familial relations aside, this slight shift in style is exactly what the series needs.
In Spy Hunter, it was one hit, you’re dead. You had unlimited lives, but you had a time limit which decreased rapidly, even as your car regenerated. The game was made for you to shoot obstacles and go fast, but often, your bullets wouldn’t eliminate obstacles quickly enough before your car plowed into them. Super Spy Hunter remedies all of this. Instead of feeling weak and powerless before the onslaught of air, ground, and water attacks, the game equips you with a decent life bar (which you can upgrade twice). You can also acquire different power-ups, like cannon control (the game automatically targets enemies), shot upgrades, bombs, and oil slicks. While you have generous (but limited) lives, it’s easy to accelerate through most of the stages without harm – particularly if you’re powered-up in any significant way. The stages are well-designed, though they do drag on needlessly at times; stage 2, with its drawn-out quicksand portion, is a particularly gross offender. The boss battles, however, are Super Spy Hunter‘s triumph. Like any good shoot-em-up, the bosses have multiple sections to destroy and waves of bullets to avoid before its taken down. They’re well-paced, difficult, and rewarding once beaten.
Super Spy Hunter has its own flaws – questionable hit detection, overly long stages, etc. – but the generous fast-paced action more than makes up for them. If you’re bitter from previous experience with Spy Hunter, like I was, don’t let that stop you from checking out its much-improved sequel. Turns out, crappiness doesn’t have to run in the family.
B+
The following two tabs change content below.