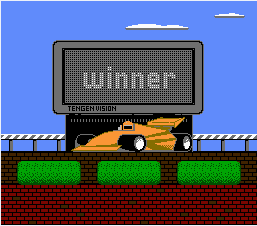 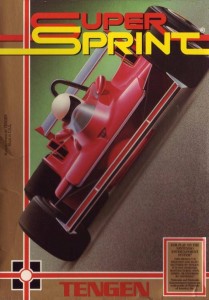 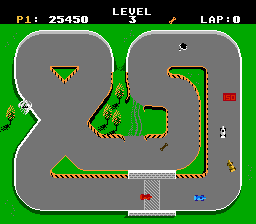 Super Sprint sounds like it should be the Ultimate Track-and-Field Game, but it’s actually all about car sprinting i.e. racing. Miniature Formula One cars race around seven tracks a la Danny Sullivan’s Indy Heat. You don’t get a choice of car, driver, etc. Just press ‘Start,’ hop in the mustard-yellow car and blaze the beat. The first four tracks will make you feel like King of Speed as you pass your fellow racers (Red, White, and Blue respectively) several laps over, but the fifth track- oh, the fifth track! Once on the fifth track, the racers decide to stop letting you win. Not only is it insulting on a personal level, but on a game level, this ridiculous difficulty leap comes out of nowhere. How can these cars suck on easier tracks, while excelling at more difficult ones? Random crap appears on every track: extra points, wrenches, tornadoes, oil slicks, it’s all sprint-worthy. Only the wrenches are your allies. If you get two during a race, use them to upgrade either your turn radius, turbo boost, and overall speed afterwards. Once you make it through the seven tracks, they’ll repeat until you get bored with twisting a little car in circles. Obnoxious difficulty leap aside, Super Sprint is the definition of average, and is worthy of approximately 8-13 minutes of your time, depending on your affection for mustard yellow and loop-de-loops
C
The following two tabs change content below.