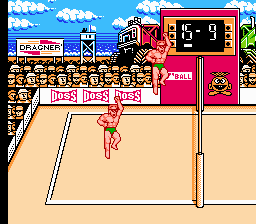 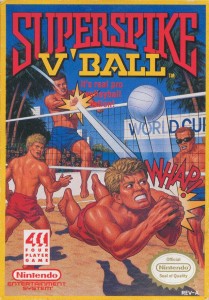 A hush falls over the crowd…

If you’ve ever wanted to see Billy and Jimmy from the Double Dragon series in their swim trunks, then Super Spike V’Ball is the title for you. The Lee Brothers are one of four selectable bro-teams, and surprisingly (given their track record), they’re heavy on defense. That’s good if you want to block your opponent’s spikes, but not so good if you want to pound a few spikes of your own. And you’ll want to be good at spiking ’cause that’s seventy-five percent of the aptly named Super Spike V’Ball. Serve, watch your opponent set up their shot- BLOCK THEIR SPIKE!, set up your shot- SPIKE! This will be the pattern of your team in every volleyball match in the game. The solid controls keep the game engaging at first, but after a few rounds, these back-and-forth patterns grow wearisome. Yes, as you advance in the American or World Cup circuits, your opponents are feistier, spiking and blocking more often, but the patterns remain the same. Super Spike V’Ball is NES Four Score friendly, and my advice is to make heavy use of it. Playing solo as I did will leave you bored. On a side note, I’m surprised this isn’t a Kunio-kun entry. Their blocky statures would be perfect for volleyball and give the game a more light-hearted feel. Ah well. At least Billy and Jimmy get a day off from Abobos, chain whips, and she-males.
B- 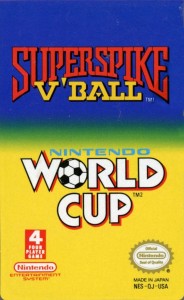 As you can see, Technos also put out a two-in-one cartridge coupling Super Spike V’Ball with Nintendo World Cup. You can find it in the wild for about two bucks, and it’s definitely worth it.