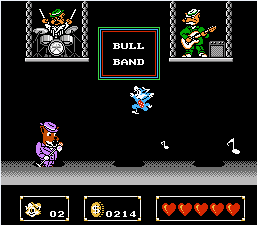 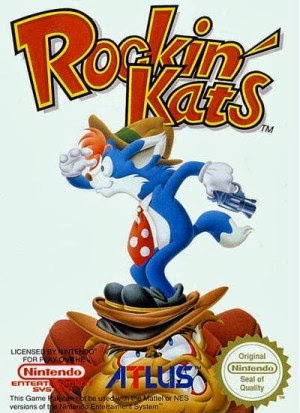 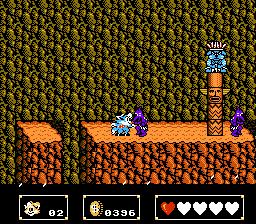 I’m not sure if this is racist or not, but it does actually happen within the game.

Before Atlus established themselves in the States as the torchbearers of anything JRPG-related, they experimented with different genres, including sports (Golf Grand Slam) and crap (The Karate Kid). Rockin’ Kats is one of their more lighthearted creations, a charming, inventive platformer that challenges as much as it delights. The story: a free-spirited, jazz-playing cat named Willy has to rescue his girlfriend, Jill (also a cat, lest the laws of nature be tampered with) from the evil bulldog crime boss, Mugsy. Willy doesn’t ever get a chance to show off his jazz skills in the game, but that small bit o’ knowledge lends his character an instantly cool air (his floppy hat and insta-swagger helps too). I’m not sure what Willy did to irritate the mob, but his punch gun – complete with upgrades – will make short work of them. The punch gun is literally a gun that shoots a big fist, like something out of Looney Tunes. Collect money bags throughout the level to buy upgrades. Two of the best upgrades are the Twin Shot, a device that releases two bullets along with the standard gloved fist; and the Super Glove, which enhances the power of the regular glove (but limits swinging ability – you can’t have it all, Willy). It does even more than dispose of canine henchmen, though. You can use it to bounce you higher like a pogo stick, repel off a wall, or, most importantly, to swing on platforms. The latter becomes a crucial skill to learn in stages where you have to swing to get across large chasms or bodies of water. Indeed, getting comfortable with the punch gun is the key to success in Rockin’ Kats.
The overall aesthetic that Atlus employs in Rockin’ Kats pulls you into its world brilliantly. The characters are goofy and cute, but never obnoxious, and the levels are colorful, bright, and make wonderful use of Willy’s punch gun. Like Felix’s bag of tricks in Felix the Cat or Ladd Spencer’s metallic arm in Bionic Commando, Willy’s punch gun elevates what would be a nondescript mascot platformer into a difficult, rewarding gem. It’s a shame that Rockin’ Kats hasn’t gotten the praise or attention it deserves. Atlus may mostly be known for teenage aggression and demon conjuring in their Shin Megami Tensei series, but I hope they revisit their whimsical roots someday.
A-
The following two tabs change content below.