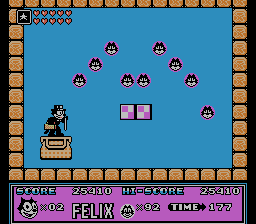 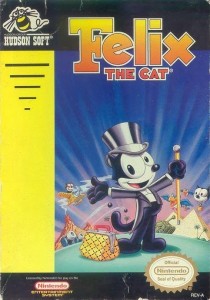 Top-hat Felix is here to save the day! 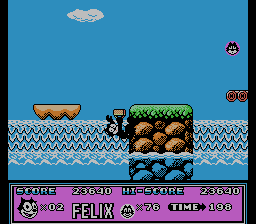 Your bag of tricks can’t save you now, Felix!

I never watched much of the “Felix the Cat” cartoon when I was a child. It was one of the few old cartoons that I couldn’t find in syndication on cable. Nevertheless, I was always intrigued by the concept: a cute, happy-go-lucky black cat with a bag full of tricks that could contain just about anything. I loved the idea of Felix, but thanks to my cousin who had lived in Taiwan and brought back boatloads of manga and anime, I saw more of “Doraemon,” which was arguably Japan’s take on Felix. Doraemon was a happy-go-lucky blue cat-esque creature that could pull just about anything out of his pocket. He had his own manga and anime series and probably a million Famicom games. He was awesome and funny and a friend you would want as a child. I’m not sure if Felix is as cool as Doraemon and, as far as I know, he just has this one game. Still, Felix the Cat is one of the best third-party platformers on the NES and that’s nothing to meow about.
Sometimes after a long day at work, you want to sit down with a game that won’t challenge you in any way, yet will still provide a fun experience. Felix the Cat is a perfect example. Much like the majority of Kirby games, Felix provides fun by way of transformation. As you go through the levels collecting little Felix heads (the equivalent of coins in a Mario game), occasionally power-ups pop out that will transform you into a stronger version of yourself. For example, in the first level you start out with just having a punching glove as a weapon, but once you upgrade, Felix can shoot stars all around his body. Upgrade again and he’s now in a car and the car’s honk is a weapon. Upgrade one last time and he’s in a tank shooting shells at the poor frightened enemies. This is one example, and there are several levels where you can transform into other incarnations of yourself. My personal favorite is the underwater level where Felix rides around in a submersible shaped like his head. The transformations are key to the game’s creativity and playability. Without them, Felix would be just another average platformer.
While I do thoroughly enjoy this game, a couple of flaws kept me from loving it more. For one, the level designs are nondescript. There are no real themes to many of the levels, other than your basic water, sky, land, space, etc. The backgrounds are bland, as well, which surprised me coming from Hudson Soft, the maker of the Adventure Island series. Also, as I mentioned previously, besides the transformations, there’s nothing to this game. The enemies are boring, the action is pretty generic, but just when I was on the cusp of losing interest completely, Felix would morph into something I hadn’t seen before and I’d enjoy the game all over again.
Hudson Soft certainly doesn’t craft the most interesting platformers (Nintendo), nor the most action-packed (Capcom/Konami), but they do employ some of the most unique mechanics out of any platformer developer on the NES. Felix the Cat is arguably their peak. Enjoy it. It goes down smooth.
B+
The following two tabs change content below.