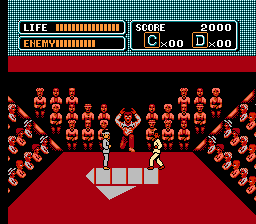 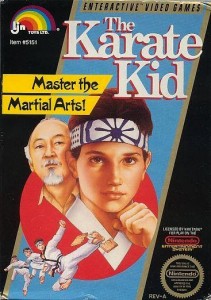 Master the Martial Arts! Apparently, in LJN’s fractured worldview, there’s only one kind.

The Karate Kid was one of LJN’s first attempts to destroy a beloved movie franchise, and to that end, they were off to a good start. There’s nothing here that purposely seeks to offend the senses as much as Karate Champ, but the entire game does reek of being hastily put together. In the first stage, you’re forced (by Miyagi, natch) to fight three guys in a karate tournament. This section of the game goes by fairly smoothly because there’s no real strategy to beating these guys: stay low to avoid their punches, hit low to knock down their life bar, and you’re done. The last three stages see Mr Macchio enter a side-scrolling portion, where enemies charge you and you knock them all down. The enemies are all duplicates and repeated infinitum, so again, there’s no real strategy to destroying them. Perhaps the biggest offense in these portions are the puny jumping abilities of the Kid and that you have to press ‘Up’ to make him jump at all. The Karate Kid, while filled typical, nonsensical additions (what’s with the girl the Kid has to save at the end?), still, by the grace of God, ends fairly abruptly, sparing you the need to rip the cartridge out and throw it at some snooty jogger who passes by your suburban house and sneers in the window daily, thinking he’s better than your cottage cheese butt. He might have a point, but there’s no need for violence.
C-
The following two tabs change content below.