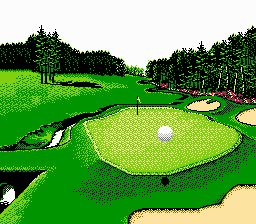 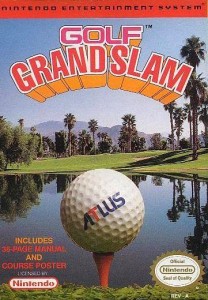 This is a far cry from Atlus’ future, where demon summoners and angsty teens roam the earth. 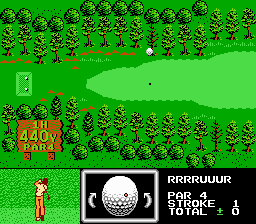 A grand slam for the ages. Take that, Denny’s.

Despite Nintendo’s attempt to destroy the sport of golf with the poorly designed, “creatively” named Golf, Atlus brought it all back home with Golf Grand Slam. Save for one burning irritation, this is how video game golf should play.
You are presented with a couple different options: do you want to pump your nine iron and get some Training in, or do you want to throw caution and (hopefully) balls to the wind and enroll immediately in the Tournament? Once you begin to play, you’re presented with a scrolling view of the entire hole, the wind speed/direction, etc. A “+” cursor allows you to choose where you want to hit your shot. After you select that, you enter a menu and very carefully choose which club you want, your standing stance (seriously, with shoe markers and everything), the direction you want to hit the ball, etc. The latter menu is the most sim-like aspect of the entire game and can be intimidating. Truth be told, I’m not sure if shifting any of those options really changes how you hit your ball, but they’re included regardless.
After that, you enter what I like to call the “God-help-you” portion of the game. A small screen comes up in your menu that shows an enlarged golf ball. Now within that golf ball, another tiny golf ball will appear and dart around like a frantic fly. Whenever you decide to press ‘A’, the tiny golf ball stops and whatever area of the larger golf ball it stops in, that’s the direction you will hit your ball. It’s ludicrous, and coming directly after the sim elements, feels a little cheesy. I don’t want to lie: most of the time you’ll hit a decent shot. But if you’re like most gamers, you’ll want to hit the best shot you can and that’s almost always impossible. Still, it’s a far cry from the diabolical WTF-ery of Golf‘s power meter. Most importantly, the game feels like a real game of golf… except not real because you’re holding an NES controller instead of a club while you play… and you’re probably not a middle-aged white guy with terrible fashion sense… and you definitely won’t win any money from playing and winning the tournament. But yeah, real enough.
B
The following two tabs change content below.