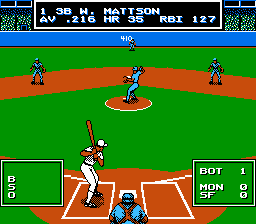 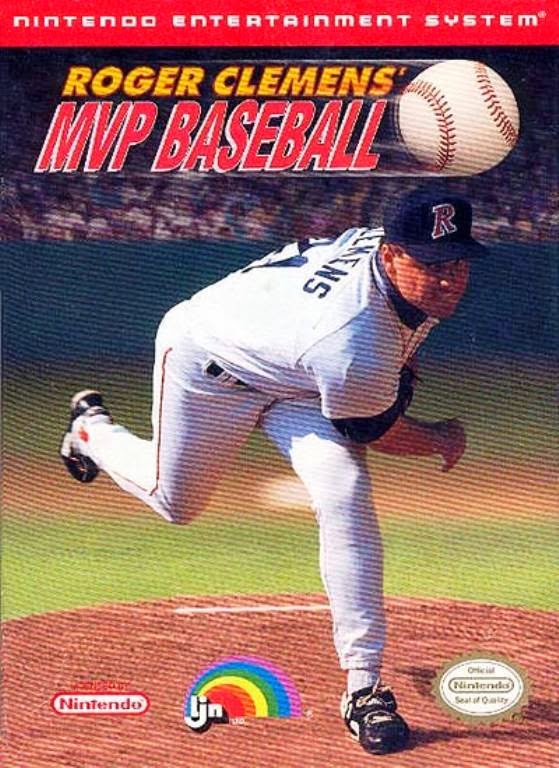 That ball’s comin’ right for you, but will you be able to hit it? Think again!

Look at all that baseball.

Just when you thought you were content with your NES baseball game collection, along comes Roger Clemens to throw a fastball in your face. As someone who once reviewed eleven baseball games in a row can tell you, there is nothing in Roger Clemens’ MVP Baseball that the majority of baseball games don’t do better. The camera angles, for example, are confusing and nonsensical, akin to Bases Loaded 2. Once a player hits a ball, the angle changes from the traditional batter/pitcher interface (with the batter closest to the camera) to a wide-angle behind-the-outfielder shot or a jarring side-shot, depending on how far the ball goes. You can follow the ball’s shadow decently, thank God, but why switch from the tried-and-true top-down camera that the best baseball games utilize? Assuming the top-down camera doesn’t suffer from slowdown, it enables the player to see the whole field, instead of sideways angles. Good luck hitting anything other than a foul too. Even when I thought the bat was connecting to the ball in an appropriate and timely fashion, Clemens and his battalion of pitchers thought otherwise. All the player models look the same, their animations are janky and disturbing, and it’s hard (for this non-sports fan, anyway) to care about made-up stats for fake teams. Sure, at its core, Roger Clemens MVP Baseball is still baseball – but at what price?!
D
The following two tabs change content below.