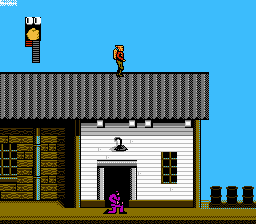 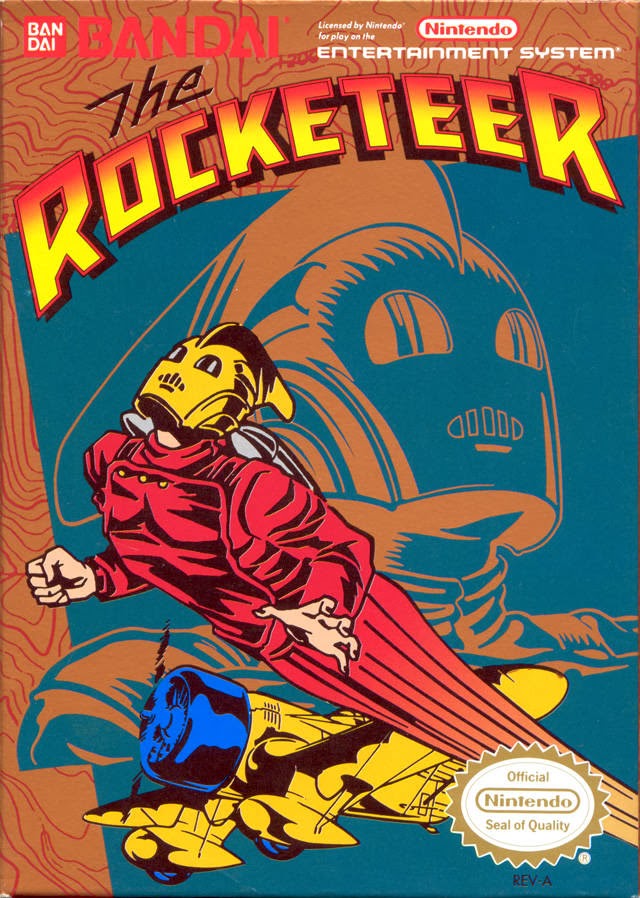 Fantastic box-art. If only the game were this well-conceived.

That gangster’s purple zoot suit, stylish though it may be, is no match for the Rocketeer’s fearsome helmet.

I complained vigorously about the Rocket Ranger resembling/completely ripping off the Rocketeer, sans spiffy helmet. Now it’s time to complain about the Rocketeer, and his video game (based on the movie, based on the comic book, based ever-so-slightly on the “Rocket Man” serials from the early Fifties).
The Rocketeer is a mediocre action platformer with gangsters, rocket packs, and unthinkably long levels (level 1 feels like four levels in and of itself, especially with all of the dying you’ll be doing). The majority of the game is a mixture of ground and air combat. Whether you’ve got two feet firmly on the ground or you’re floating in the blue skies of Old Glory, you’ll be punching or shooting the same thug template repeatedly. On the positive side, the combat feels good enough and you have an assortment of weapons to use. To counteract that, the gangsters usually work in pairs. They shoot bullets, throw Molotov cocktails, roll out little tanks to greet you. They’ll do anything to get your rocket pack back, which means, cheap shots abound. But wait! You’re the Rocketeer! Surely you can fly past all the gangsters and their nefarious tricks! In theory, that is possible, but you’re gonna need fuel cans to do it. And for a game about a flying rocket man, actual rocket fuel seems to be in low supply (just like in Rocket Ranger!). Your best bet is to find a place where gray-suited thugs respawn continuously and beat them down over and over again. They’ll either drop hearts, bullets, or fuel and you’ll need all three for the Rocketeer’s missions. Once you have enough fuel, you can fly until you run out. Just don’t try to show off for the ladies. The rocket pack is touchy and doesn’t respond well to quick movements; slow rocketeering will save your life, even if the lady onlookers think you’re a square. You could play worse licensed games, you could play better licensed games, you could play The Rocketeer. Whatever you choose, conserve rocket fuel. It’s a limited resource.
C
The following two tabs change content below.