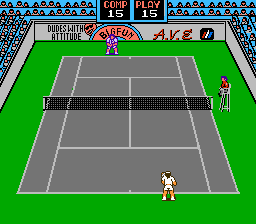 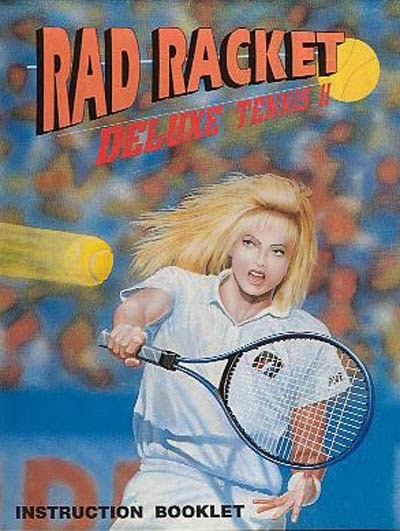 Deluxe Tennis II implies that there was ever a Deluxe Tennis I. There wasn’t and there never will be. So why market this nondescript tennis game as a sequel? Sequels suggest that you sold enough of the first game to warrant a second. The clueless, uninformed consumer sees the box and thinks, “Hmm… I do like rad rackets. And sequels are always better than the first. I’m gonna buy it!” The rest of us – even if we are unaware that there isn’t a Deluxe Tennis I– see the box and think, “No thanks. That’s one creepy looking manufactured woman.”
Deluxe Tennis II is yet another review that hearkens back to the unlicensed multi-cart, Maxi-15. Nothing has changed. The tennis at the heart of the game is decent. Players move quickly, the computer AI isn’t busted, and it’s possible to actually hit the ball over the net. There are six racially diverse tennis players to choose from, each with a supposed special ability. Yet, when the players move to the court, both your character and the computer look exactly the same. Always. I picked three different people, and they all resembled a white person with white shirt and a white shorts. They don’t play any differently either. Charly might be an expert at drive, Chang an expert at chop (‘groan’), but you wouldn’t know it to take them onto the court. As for courts, you have your pick of grass, clay, and hard. I thought I could feel a slight difference on the grass court, but given the illusion of choice found on the character select screen, it wouldn’t surprise me to learn that all three courts handle the ball the same. Deluxe Tennis II had more purpose on a cartridge that contained other games, but as a stand-alone tennis experience, it’s mediocre. Double Fault II!
C
The following two tabs change content below.